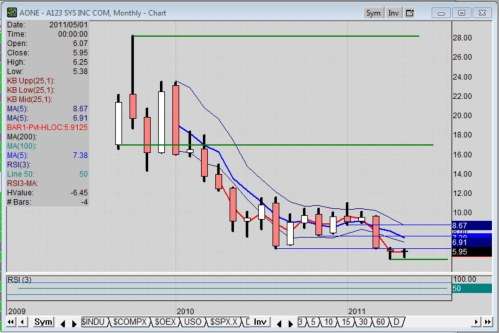 In March, A123 Systems (Nasdaq: AONE) stock traded very shaky after an annual net earnings loss of 1.56 loss per share. A few month’s later, the stock chart reveals it has broken every price support since its IPO.
Advertisement

The monthly chart of A123 Systems (Nasdaq: AONE) tells the history since it IPO in 2009: The trend bias is clearly down. Question is, how much further down might stock stock go before buyers come back in?

Despite 2010 total revenue being up and product revenue being down, A123 Systems (Nasdaq: AONE) stock did not initially sell off as much in March as might be expected after the annual report. However, the stock price did gradually erode and picked up speed.

Simple truth is, sometimes it’s not the stock news but the market’s reaction in the form of price dynamics to the news that tells the depth of the story.

According to News Releases

Fact is, David Vieau, CEO of A123 Systems said in previous news releases that the company more than doubled A123's worldwide manufacturing capacity on an annual basis in 2010, and put in place the foundation to support rapid growth in the years ahead.

He added that A123's momentum was strong; and have expanded their portfolio of blue-chip customers in each of our target markets.

On the auto sector front, which is the heart and soul of their business with batteries of the Chevrolet Volt and others, A123 was awarded a separate production contract with a major North American automaker for an electric passenger car that is expected to enter the market during 2013

In addition, A123's selection by AES to provide energy storage systems for a second power plant in Chile, combined with their work with power generation equipment manufacturers, reinforces the company’s worldwide leadership position in the electric grid market.

For the record, A123 Systems is a developer and manufacturer of advanced Nanophosphate™ lithium ion batteries and systems.

While the company is certainly not out of cash per its statements, A123 Systems reported cash and cash equivalents of $216.8 million at December 31, 2010, compared to $300.8 million at September 30, 2010. The change in cash was primarily related to capital expenditures as the company worked toward completion of the first phase of the company's capacity expansion.

The company believed the market would understand that, and explained why some investors were voting at the time to buy shares on dips as others sell their shares. One look at the chart, though, and you can see those beliefs were unfounded.

The rally this past year only made the stock rise to a high of $10.99. Now the stock is languishing in the cellar just above its new low at $5.21.

Final Assessment: Is AONE a buy at these levels? For certain the stock is cheap and the potential of the technology is bright. However, until the big money like the hedge funds and mutual funds participate in buying, the stock may not go anywhere for some time.

For certain, the one-year lock-up of the IPO occurred last year, so that might explain the degree of the fall post IPO.

Full Disclosure: Frank does not own any shares in this stock at the time of this report.