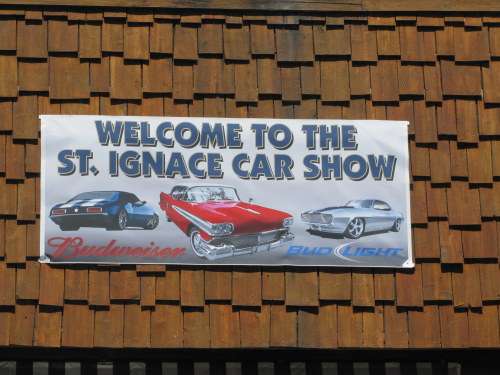 2012 St. Ignace Car Show: Three days of cruising and lots of showing off

Three days of car show began in St. Ignace, Michigan with a kick-off cruise event followed by parade the second day. The videos will do most of the reporting.
Advertisement

Yes, it’s true that I was there in St. Ignace for more than the 2012 car show which ran from June 28 through June 30th. Me and Judi headed up to see some friends, like Warren Hagan (owner of Fort Algonquin); Al Trombley a.k.a. Junior and friend of “Roseville Joe” Gibbs; and Jamica, (owner and restorer of multiple Opel GTs as well as owning a Native American Indian store/museum called Keg & Anvil). Still, we fully intended not to miss out on eating white fish on a wooden plank, enjoy the weather and water of the Upper Peninsula, not to mention the car show.

Fact is, I had heard of the quality and magnitude of this car show when we visited Kim Hagan in St. Ignace last year. This year, though, she is in Italy studying solar flares. I was unsure, though, if even we could make it, considering my mom-in-law is in Hospice. But we did manage to get a away for a few days this time, including seeing my sister, Dorothy, in Traverse City on the way back.

Regarding the St. Ignace Car Show, it is comprised of literally three days of car events. The first night centers on the first cruise, which I have video below. The second day centers on sunshine, cars and displays in town, followed by a parade of cars. The third day focuses on awards.

For the record, I get around quite a bit when it comes to Michigan car shows, cruises, etc. This time was a real treat, though. I got to see cars from areas other than the down-state of Michigan. And the majority of these cars were some of the cleanest I have seen anywhere.

Here are the video shots I took from the first day’s kick-off cruise.

Unfortunately, we could not stay for the full three days, but we managed to get a lot of photos and videos in downtown St. Ignace on Day 2. Even Chevy Performance was there.

In downtown St. Ignace, everyone was getting prepared for the parade later in the evening. And as we were leaving and crossing back over the Mackinaw Bridge, the line of cars heading north still looked heavy.

Now it's your turn to view various cars and displays from Day 2 from the downtown area of St. Ignace. Enjoy! And I plan to return next year.

And while I wanted to get the videos up first, be sure to check out the photo gallery; that is, after I process them first.

Anonymous wrote on July 2, 2012 - 10:37pm Permalink
Just fyi, the black hhr is owned by zzperformance, they make all of the modifications in house fitter the hhr, cruze, grand prix, and cobalts. Currently they have a grand prix running 8's in the 1/4, and a 800+ HP cobalt. Check them out at www. zzperformance .com located in grand rapids Michigan