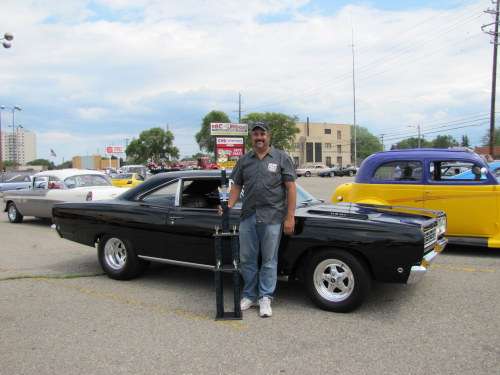 Pay attention to these local car shows, especially the 2012 Lions Car Show in Center Line, Michigan, because they will provide you with a great view of automotive enthusiasts and their rides at their very best; and we have videos to prove it.
Advertisement

Special thanks to my buddy, Ray Talley, for always reminding me when the next Lions Car Show will be taking place. And this year has indeed been a bit convoluted, as a few of my family members with some serious health problems have been weighing heavily on my mind and my heart lately. So, it was good to take a short break and get back to my summer routine of seeing the cars once again.

For sure, the Center Line Lions Car Show is usually the first or second of the open-air car shows in my local area surrounding the metro-Detroit area. For the record, Center Line is basically a city within a city; in this case, within the city of Warren, just a few miles south of the GM Tech Center where I used to work.

Having arrived a bit late this year because my house had to be set up for its showing today, I quickly made my way around the cars as the Lion’s Club team was already announcing the trophy winners. I thought it was more important to cover the cars.

It’s amazing how many times I see the same cars, but with slight revisions. Every year, a different set of wheels, a louver here, a new pinstripe there will be featured on the vehicles.

This year, though, the Mopars were in full bloom. In fact, the black Plymouth Road runner owned by Kevin Smith took the show’s top honor. See the photo here and the group photo towards the end of the second video.

Other vehicles, though, took their class, like that 1962 silver Plymouth with the 440 engine. Then there was the 1965 Dodge Coronet 500 with the Max Wedge 426 engine. This body was flawless; meaning, if you cannot see a hint of a ripple when the car is painted black, then that bodywork is indeed flawless.

And who could miss that '40s era Willys. If the bright orange didn't catch your eye, then the blower did!

As the show came to a close, though, one of the Lions’ club members asked if I would take a group photo. So, I was pleased to be included this time around. And I now have two sets of videos to honor the entire occasion. Enjoy!

And to my brother-in-law, Larry Weinert, these images are dedicated to you, as I know you would have loved being at this car show. Still have yet to find that 1946 Merc, but perhaps some TN reader can send me one from their collection.