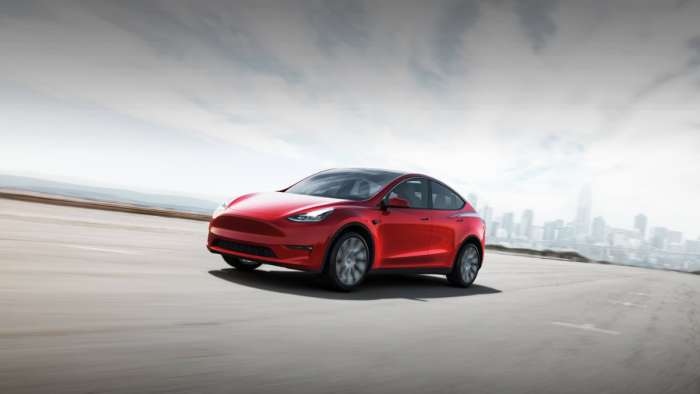 After first being announced at the unveiling event of the Model Y back in 2019, Tesla has finally opened up orders for the 7 seat and RWD versions of the Model Y.
Advertisement

As of writing the 7 seat version is only available with the newly launched Standard Range RWD and the Dual Motor all-wheel-drive versions of the Model Y. 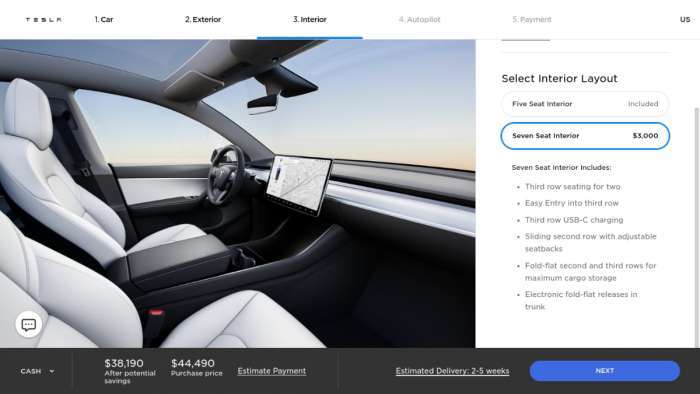 Included in the seven-seat version of the Model Y is third-row seating for two, easy Entry into the third row, third-row USB-C charging, sliding second-row with adjustable seatbacks, fold-flat second and third rows for maximum cargo storage, electronic fold-flat releases in the trunk.

The Model Y being a smaller vehicle than the Model X, there had been fears the third row will be too cramped for passengers. However, the sliding second-row should help to make more room and alleviate any concerns. At least if not big enough for adults the third row should have enough space for children and maybe even smaller adults.

As for the Standard Range RWD Model Y, Tesla’s cheapest version of the mid-sized crossover comes with impressive specs. The vehicle goes 244 miles on a charge, has a top speed of 135 miles per hour, and can do 0 to 60 in 5.3 seconds. 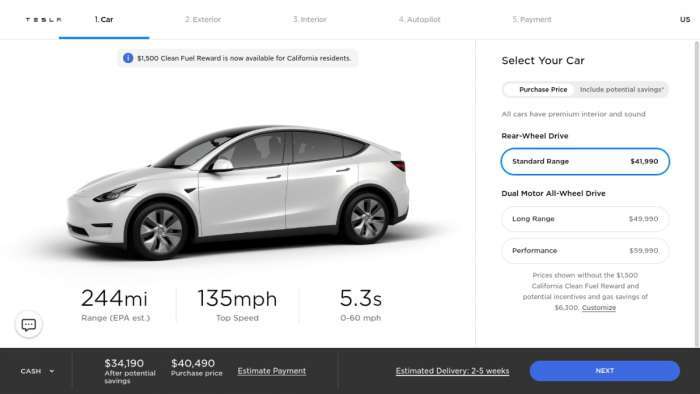 However, according to Elon Musk, this version of the vehicle was no longer in the pipeline due to the unacceptably low range. Back in July, after removing the Standard Range Model Y from the online configurator the Tesla CEO said Tesla will not produce the vehicle since its EPA estimated range will be below 250 miles.

At the unveiling, Tesla advertised the Standard Range Model Y with 230 miles EPA estimated range. However, as is usual with Tesla vehicles the company has delivered the Model Y with better specs than originally thought. And with the 244 miles EPA estimated range, the Tesla CEO might have thought the range is close enough to 250 miles he considers should be the minimum going forward.

One reason for the better than expected range might be Tesla’s move to single-piece rear casting on the Model Y. According to Elon Musk, this method has decreased the number of parts in the chassis of the vehicle from 70 in Model 3 to a single piece.

According to the configurator customers who order the vehicles should expect deliveries in 3 to 5 weeks. This would mean the first deliveries will start at the end of January or early February.

So what do you think? Are you excited about the Standard and range and 7 seater versions of the Model Y. Are you going to be ordering the vehicle? Let me know your thoughts down in the comments below.

Tinsae Aregay has been following Tesla and The evolution of the EV space daily for several years. He covers everything about Tesla from the cars to Elon Musk, the energy business, and autonomy. Follow Tinsae on Twitter at
@TinsaeAregay
for daily Tesla news.