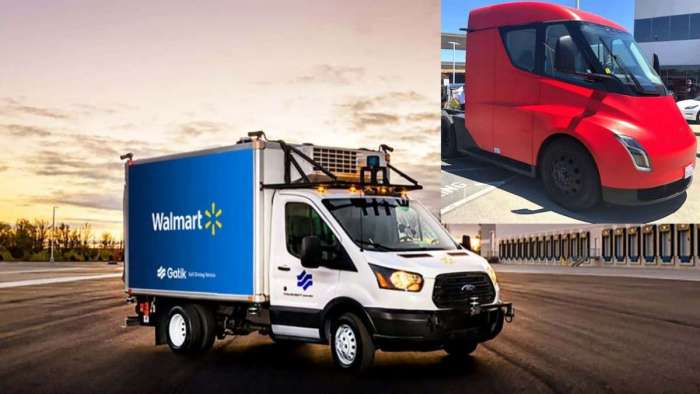 Walmart is known as a global retail group and controls a large part of the US market. But what many may not know: the retail giant is also active in the field of autonomous driving together with a startup Gatik, directly competing with Tesla.
Advertisement

Walmart has been working on a pilot program for autonomous driving for over a year, in which it relies on autonomous panel vans from the startup Gatik. This pilot program is now to be expanded.

As part of the pilot, goods were transported two miles between a distribution center and a Walmart store in Bentonville, Arkansas. Since then, as Walmart announced in a press release, more than 70,000 operating miles have been covered in autonomous mode with a safety driver on board.

Now the next step is imminent: Walmart wants the autonomous multi-temperature panel vans from Gatik to drive the route without a driver. "This achievement marks a new milestone that will be the first driverless operation on the middle mile of the supply chain for both Gatik and Walmart," said Walmart. Now they are working with Gatik "to monitor and collect new data" and thus to "stay up to date with driverless autonomous vehicles," reports Finanzen.

The project is now also to be expanded to a second location. A longer route is being tested: operations on a 20-mile route between New Orleans and Metairie, Louisiana, are due to start at the beginning of this year. A second use case is also being tested: the delivery of items from a super center to a Walmart pick-up point. Customers who live further away from the Walmart store in New Orleans should benefit from this service of being able to conveniently pick up their goods at a certain location nearby. "With 90 percent of Americans living within 10 miles of a Walmart, a closer shop isn't always the answer. Maybe it's just a pick-up location where an autonomous vehicle delivers in a constant loop," Walmart said in its press release.

The tests that the retail group is carrying out with Gatik are, according to Walmart, "only two of many use cases" that are being tested with autonomous vehicles. So there may be more interesting news about autonomous driving and how it can be integrated into a delivery ecosystem in the future. It remains to be seen whether Walmart's program can also compete with companies like Tesla or Xpeng , which are active in the field of autonomous driving, in the future.

So far the automotive experts were thinking that Walmart would order the Tesla Semi for its deliveries. However, if Walmart's self-driving program gets to Level 5, why would Walmart need Tesla Semi trucks? But, up to this point, Walmart has tripled its Tesla Semi orders. In September 2020, Walmart Canada announces it will be tripling its Tesla Semi reservation to 130 trucks. With this order Walmart Canda becomes the company with the highest order of the all electric truck.