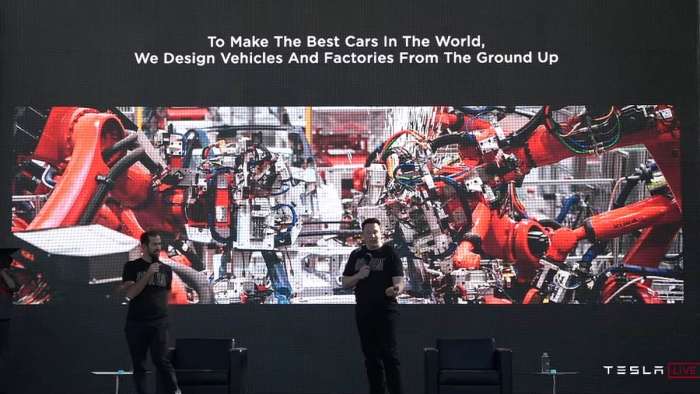 In a tweet sent out a few hours ago, Elon Musk thanked the Tesla team for their great work on deliveries. In the tweet, Elon Musk also thanked owners for being accommodating and calls this quarter their toughest in global logistics.
Advertisement

"Thanks Tesla Team for great work on deliveries! For new owners, we super appreciate accommodating us on delivery timing! Definitely one of our toughest quarters in global logistics," Elon Tweeted this afternoon in a tweet, which leaves more questions than answers.

Thanks Tesla Team for great work on deliveries! For new owners, we super appreciate accommodating us on delivery timing! Definitely one of our toughest quarters in global logistics.

It is currently unclear what logistics problems Musk is referring to, but it is good to hear the team was able to overcome them.

In a leaked internal memo just 6 days ago Elon Musk had written to Tesla employees saying, they have a shot at record deliveries. And to have him thanking the team so soon and with 4 days still remaining to the quarter, this bodes well for Tesla’s prospects of hitting record deliveries and achieving profitability.

Tesla has also been implementing other tactics to ensure profitability for this quarter. The company brought back Enhanced autopilot for a limited time offering with the option to expire on September 30. Which coincidentally enough is also the end of the quarter.

But this wasn’t the only move Tesla implemented. The company also offered an acceleration boost for long-range all-wheel-drive Model Y owners. The upgrade comes as an over the air update and will cost $2000 to bring down the 0 to 60 time from 4.8 seconds to 4.3 seconds.

Tesla in the first half of the year has delivered a little over 179,000 cars. But, despite a worldwide pandemic, the company reiterated its plans to deliver 500,000 vehicles in 2020. This means Tesla will have to deliver a little over 320,000 cars in the last 6 months of the year.

This is almost as many cars as the company delivered in the whole of 2019. But Tesla seems up to the task. The company recently installed the world’s largest casting machine at its Fremont California plant.

This equipment reduces parts in the rear of the Model Y from a potential 77 to a single part. This should significantly reduce the complexity and manufacturing time of the Model Y.

The company has also said it has reached an annualized run rate of 200,000 cars in its Shanghai Gigafactory. And, if there weren’t any unforeseen roadblocks, that means close to 50,000 Moded 3s have been delivered in this quarter just in China.

According to another leak, starting in late 2020, the company also plans to start shipping the made in China Model 3 to other Asian countries. This should ease the logistics problems Elon Musk has mentioned. Some of the countries named in the leak are Singapore, Australia, Newzealand but the leak also said other Asian countries and Europe. Due to all the countries named being righthand drive, here we have made the prediction Tesla will be moving right-hand-drive Model 3 production from its Fremont California plant to the Shanghai Gigafactory.

In the Battery Day event, Elon Musk has said, long term Tesla plans to deliver 20 million cars a year. That should mean a further 20X increase in production over the coming years. You can see our in-depth breakdown of all the breakthroughs that should enable this goal here.

But for this quarter we shouldn’t wait long to know the delivery numbers. The company is expected to announce the final count in the first few days of October. We will keep you posted as soon as those numbers come out.

But, till then what do you think? Will Tesla be able to deliver 320,000 cars just in the second half of the year? Also, what do you think are the logistics problems the company faced? Let me know your thoughts down in the comments.

For more information checkout: How the new all-electric ID.4 undercut Model Y in price. Also, see Tesla might be planning to start offering a subscription service for Autopilot.

Tinsae Aregay has been following Tesla and The evolution of the EV space daily for several years. He covers everything about Tesla from the cars to Elon Musk, the energy business, and autonomy. Follow Tinsae on Twitter at @TinsaeAregay for daily Tesla news.