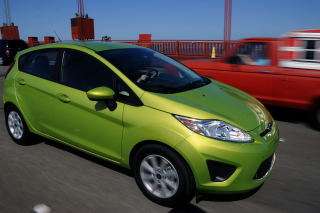 The performance of the PowerShift automatic transmission in the new, 2011 Ford Fiesta subcompact economy car raised questions for one reviewer. The questions may stem from a mere fluke, but they remain unanswered by Ford.
Advertisement

If I was writing any kind of commonplace review of the little Ford Fiesta, I would give the economy car generally high praise for its spunk and feisty vigor. For its economy, too. But this is a forum for news, and only my experience with the new-concept, PowerShift transmission in the 2011 Fiesta elevates to the level of news.

The transmission came close enough to failing me that its one-time performance warrants this transmission-only report.

The Fiesta is a world-concept car introduced in the United States by Ford in mid 2010 as a 2011 model. The starter model, with a list price of $13,995, comes with a 120-horsepower four-cylinder engine and five-speed manual transmission. For an additional $1,070, you can get the six-speed PowerShift automatic that Ford heralds as a “North American industry exclusive.”

Original press material describing the six-speed automatic promises “the responsive performance of a manual shift with the convenience of a traditional automatic.”

I won't argue with that. Driving a PowerShift Fiesta for a journalist's standard field evaluation – one week of treating the test model like it's your everyday transporter – I averaged a fraction over 37 miles per gallon over 350 miles of around-town driving. The official EPA fuel-economy estimates come in at 29 mpg city, 38 mpg highway, so I did very well.

(With a manual transmission, Fiesta drops one mpg in both city and highway ratings. You can purchase a Super Fuel Economy package for $2,765 above Fiesta's base price, boosting the EPA rating to 29/40, an industry high among sub-compact cars, according to the EPA's Fuel Economy Guide.)

After a half year in service in the United States, any problems with Ford's first PowerShift application here should have surfaced by now. But temperature is one big variable that suddenly has changed since Fiesta's introduction. Where I live in the frozen northeast, out first encounter with icy temperatures occurred while I was test driving the still-new Ford. Even with today's electronic engine and transmission controls, a car starting on a frozen morning must run through a choke cycle till it reaches normal operating temperatures.

The first frozen morning I started my test-model Fiesta, the car barely made it off of the parking pad. The engine stuttered and gurgled and felt like it was about to stall – like an old-time, carbureted engine that a driver floods by pushing off too quickly. My impulse was to declutch and feather the accelerator to bring up the engine RPMs. But of course, the PowerShift is an automatic. It has no clutch pedal. All I could do was let the engine and transmission controllers catch up and work out the problem.

Most of my anxiety over shifting occurred during the cold-start cycle. But at times, even when the car was fully warmed, the transmission seemed confused about what gear to select. That was especially true when I made partial-load demands on the auto, as when holding a steady, moderate speed while climbing a hill near my home. In such cases, my impression wasn't so much that the transmission was searching. More accurately it seemed stuck, and simply stayed in an inappropriate gear from confusion – until finally the controller worked out the algorithms.

I contacted Ford several times via e-mail, asking if the company had received any complaints or was otherwise aware of cold-weather issues with the Fiesta PowerShift transmission. I received no response. Therefore the issue stands, at least for now, as one car writer's questionable experience.