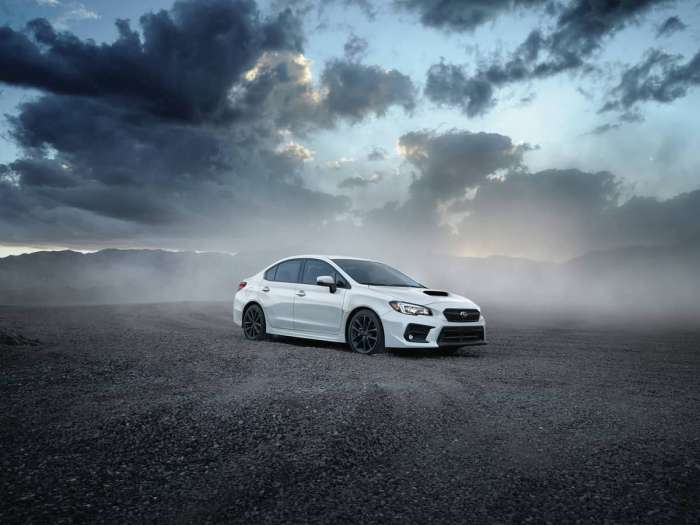 SUV/Crossovers are driving Subaru sales, but performance fans don’t have to worry, the Japanese automaker is not giving up on the WRX and WRX STI.
Advertisement

SUV/Crossover vehicles like the 2018 Outback, Crosstrek and Forester are driving sales for the brand, but Subaru isn’t giving up on WRX and WRX STI. Sales of the WRX/STI aren’t what’s helping Subaru of America set new records every month.

It’s the all-new Crosstrek and 2018 Outback that is leading the way. WRX/STI sales were down again for June with the performance cars slipping -12.4 percent for the month and down -7.1 percent the first 6 months of 2018. In contrast, Crosstrek has its best-ever June and was up a whopping 83.6 percent leading the brand to a record month.

But performance fans don’t have to worry, according to a report from Motoring,com.au, Subaru Australia managing director Colin Christie said Subaru isn’t going to ax their performance cars. Christie says, “Subaru has made is very clear that their focus moving forward is both SUVs and performance cars, and they’re continuing to work and develop that range (WRX/STI).”

Subaru won’t abandon their WRX/STI performance cars just because their SUV/Crossovers are hot right now. Sedans like the Impreza and Legacy have also slipped in sales, but Subaru won’t ditch their sedans like Ford is doing.

The Japanese automaker will continue to build these cars in the future.

Their performance line is a big part of the Subaru culture and it’s what makes their Outback, Crosstrek and Forester vehicles fun-to-drive. Subaru Corp and Subaru Tecnica International use the technology from WRX STI to develop their SUV/Crossover lineup. They develop the technology on the race track and rally stages and then design the performance features into their other vehicles.

The next-generation WRX/STI is still a couple years away, probably 2020, and big changes are coming.

However, performance fans don’t have to worry, Subaru Corp won’t give up on their performance car lineup. Christie went on to say, “I’m confident there will be a replacement for the WRX and STI moving forward. It’s not five to 10 years away, either, but it certainly won’t be here in the next 12 months.”

EVOLIX wrote on July 5, 2018 - 7:48pm Permalink
Subaru is either too blind to see or don't care due to small sales numbers.Heck, the Detroit trio has bigger sales numbers for their sport cars in the 1st quarter then the WRX/STI combined for a whole yr. Why would you buy an old piston slap-happy time bomb with 300hp which by the way ain't squat in 2018. Its not competitive Subaru. I love Subaru and you have an awesome opportunity to create a mean 4dr halo car, quit being a you know what and build what the people want. Meantime, I'll have to keep driving my 500hp mustang gt and hope the back end doesn't slide out when it rains.
Ahmed wrote on July 6, 2018 - 4:01am Permalink
No offence to your Mustang, I was in a 2015 V* one and man does that car feel Heavy! Straight lines are fine, but handling doesn't inspire confidence... And it is heavier than an STI (3704 vs 3386 lb) *Car&driver, V8 Mustang. Considering an STI is 4-door and AWD that it laughable. Dunno why most American sports cars are heavy.
Ahmed wrote on July 6, 2018 - 3:53am Permalink
Tanking? mmmm why would that be I wonder? Oh, maybe cause the same car been on sale since late 2014?!
Paul DiBona wrote on July 6, 2018 - 6:07am Permalink
If Subaru would bring back a WRX hatchback their sales would increase BIG TIME I'm on my 9th Subaru had 2. WRX hatchbacks. There is a lot of talk on various forums with people longing for a WRX hatchback. It seems Subaru does not listen to their customers
Guillermo Sánchez wrote on July 6, 2018 - 9:14pm Permalink
Why would you buy the 2018, when you know that the 2019 would be so much better in a couple of months. I bought my STI last year in October. I'm so happy with my car! I drove recently a Q50 3.0t. I'm so happy with the feeling of my STI. In the next gen I would love as much as possible of the feeling of a raw mechanical car as this one has. That is one of my fears, to lose that feeling, like I felt on my 2015 WRX. Of course I would love to hear that the car became reliable beyond expectations. That people can mod it by the known tuners with no fears, that the rumbling sound gets to be better than the one it currently has. Let's say that the car can on preference sound like an STI Cobb stage 2 or quiet to be driven on the highway, if necessary. I would like to have the chance to feel it more rear wheel drive if desired. And an infotainment that does not have as many issues with my phone as the last interesting thing. Better fuel efficiency would be also desirable, but it is not fundamental. I bought my car and not a Civic Type-R when the other one was available, because of the experience, especially the combination of the engine and the exhaust sound. I love the sound on the 5.0 V8 Mustang. I feel that that car has improved a lot from the previous engine generation. It can be felt, heard, and seen inside of the car. Fortunately for Subaru a sedan works much better for me.