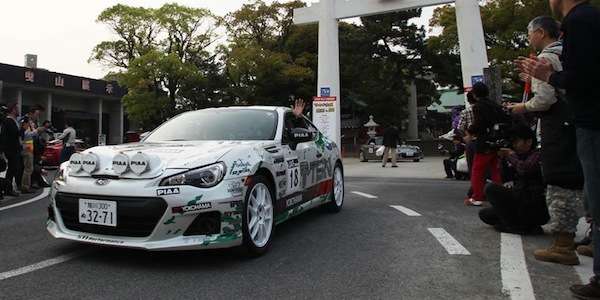 Would you trade your Subaru WRX STI for a BRZ STI Rally car?

The 2015 Subaru WRX STI is a Rally-bred race car. Why is Subaru rolling out a 2014 BRZ Rally car?
Advertisement

Subaru has been rally-racing since the early 70s and that’s where the Subaru teams developed today’s rally-bred 2015 WRX STI. The seeds for the current successful Subaru Rally Team USA were first sown when Jack Coyle, who owned a Subaru dealership in San Bernardino, California, built a rallying Subaru FF-1. "Pete" Petrowsky, a salesman at the dealership, first drove it in the Baja 500 off-road race in 1971.

This year, Champion Katsuta Norihiko and Adachi Sayaka will compete in the Subaru WRX STI, and for the first time, Subaru and Subaru Tecnica International (STI) will bring a new driver Kamata Takuma to compete in the new Subaru BRZ rally car. They will bring a full compliment of the top Japan Subaru mechanics to support the WRX STI and BRZ race teams.

We would expect to see the Subaru WRX STI in the race, but what about the new BRZ? The Subaru coupes are not new to racing. Where did Subaru’s involvement in Rally racing start? Noriyuki Koseki from Japan entered the Baja 500 in a Subaru GL Coupe that had been built for rallies in Japan. Koseki went on to form the Subaru Rally Team Japan, and he also entered a Group A Subaru Leone RX Turbo in the famous Safari Rally with various drivers in the 1980s.

In 1988, Koseki helped establish Subaru Tecnica International (STI), and a year later STi formed a partnership with Prodrive to create the official Subaru World Rally Team to compete in the World Rally Championship (WRC). This was the foundation for developing the WRX STI rally cars.

We don’t think of the Subaru BRZ two-door coupe as a rally car, because the BRZ is a rear-drive only sports car. But the BRZ with the Boxer engine is a perfectly balanced car with the engine sitting low in the chassis. It will be interesting to see how the new Subaru BRZ performs on the Rally circuit. But STI is likely using the race in Japan to further enhance the BRZs driving dynamics. It’s the perfect testing grounds to see how to better work on a new BRZ STI.

The first leg of the Tour de Kyushu 2014 in Karatsu Japan, kicks off the All Japan Rally Championship this weekend. The 2014 Subaru BRZ is fitted for rally action. Would you trade your Subaru WRX STI for a BRZ STI Rally car? We can only hope that STI is perfecting a new BRZ STI coming in the future.