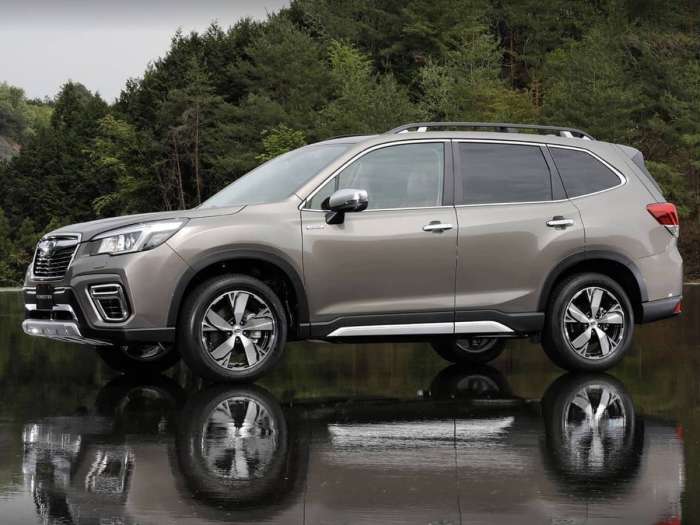 Subaru Corp needs the new 2019 Forester to show up big as consumers wait for the new model. Will loyal customers give it enough love?
Advertisement

Even though Subaru of America is riding 80 consecutive months of growth, the Japanese automaker’s profits are dropping. Subaru needs their loyal customers to give the all-new 2019 Forester enough love to help get things back on track. Subaru Corp reported on Monday, its lowest quarterly profit in over five years, driven by a slump in global demand for its popular Forester SUV.

A report from Reuters says Subaru’s operating profit fell 51.8 percent in April-June from a year earlier to $517.38 million, as the smallest Japanese automaker has the need to rely on more sales incentives in the US. Subaru is offering 0% financing on all new 2018 Forester, Outback, Impreza, and Legacy nameplates also weighing on Subaru’s bottom line.

U.S. sales of the popular Subaru Forester fell in the last 7 months as customers held back from buying the small all-wheel-drive SUV until a revamped model is launched this fall. Forester is off 10 percent for the year, with 93,036 units sold compared with 103,240 during the same period last year.

Subaru needs their customers to respond well to the newly-remodeled Forester. Tom Doll, President and CEO of Subaru of America says, “We’re thrilled to see the ongoing excitement around the 2019 model year vehicles and look forward to upholding this momentum by continuing to deliver safety, versatility, and reliability to our loyal customer base.”

The all-new 2019 Subaru Forester doesn’t get radical changes on the outside but gets a total revamp underneath. The new Forester gets a new 2.5-liter Direct injection boxer engine, an updated suspension, improved body stiffness which will translate to better stability than the outgoing model, and a lower center of gravity for less body lean in the corners. It will also have more room in the interior.

Subaru needs the newly-remodeled fifth-generation 2019 Forester to show up big in the U.S. and around the globe. It arrives at U.S. showrooms this fall.

Ed B wrote on August 9, 2018 - 9:19am Permalink
Of course Tom has to have the "glass half full" attitude. However, excitement for the new Forester may not meet their expectations. While the previous XT was not a big seller, it attracted enthusiasts and got them in the door. I'll be keeping my 2017 XT and won't upgrade. The XT was unique in the market place and competed favorably with the luxury smaller SUV's - more safety and more practicality at a price that beat the Audi Q5, Lexus NX and Acura RDX. The new Forester. while enhanced from a safety standpoint, can't match the performance of their competitors. Too bad: Image a 2019 XT on the new global platform with the new Ascent turbo, the safety upgrades with a bit sharper exterior styling cues - would have been a segment leader out the gate. Unfortunately, the new Forester isn't a game changer.
Tj wrote on August 9, 2018 - 10:10am Permalink
Lose of turbo no more forester rip
Jason Julian wrote on August 9, 2018 - 3:22pm Permalink
No manual transmission in the 2019 Forester means I’ll be buying a VW Alltrac.
Digital Doc wrote on August 9, 2018 - 4:02pm Permalink
Agree with Ed B. The new Forester, with its all new engine, and the total revamp, is pretty much a yawn. Interesting that Subaru does not see the turbo market, while the new Acura RDX offers a turbo four. In addition, the Mazda CX-5 is likely to offer a turbo for the next year. I seriously doubt that a standard eyesight system, with features that have become increasingly standard in many vehicles in their lower tiers will fuel much excitement. About the only excitement is that Android Auto and Apple Carplay should fix the otherwise dismal Starlink infotainment system. At least Crosstrek sales should continue for Subaru... Seriously need more competition in the small CUV in the engine dept from more manufacturers, but at least this segment is growing up, and better engines appear to be coming- although so far not from Subaru.