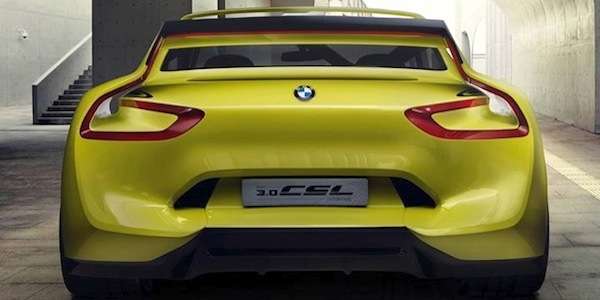 Will hot BMW M4 GTS be unveiled at Pebble Beach?

BMW of North America will celebrate its 40th anniversary at Pebble Beach by unveiling two concept cars next month. It’s being reported that the two cars will be the hot BMW M4 GTS that will take its cues from the M4 MotoGP Safety car revealed earlier this year. The M4 GTS is expected to make it to production and be in BMW showrooms next summer. The other car could be the 3.0 CSL Hommage that was revealed back in May.

Instead of injecting a mixture of fuel into the combustion chamber, it injects water into the combustion chamber. BMW says they’ve perfected the technology and it gives the production engine of the M4 (with 431 bhp/317 kW), “a tangible boost in performance.” They haven’t disclosed exactly how much power the water injected powerplant produces. The M3 and M4 will likely receive the water injection technology as part of a planned engine upgrade next year.

The BMW M4 GTS concept shown at next month’s event, will be a forerunner of the production car that is designed to be a track-focused version of the regular M4. It should come with lower weight and new body panels that will give it a more aerodynamic look and possibly a new rear wing like the M4 MotoGP.

Will 3.0 CLS Hommage make it to production?

We also expect BMW to bring the 3.0 CLS Hommage concept car to Pebble Beach. BMW revealed the car’s steering wheel when they announced the BMW at the 2015 Monterey Car Week last week. The one-off car was first unveiled at the Concourso d’Eleganza Villa d'este event in May, but the 3.0 CSL Hommage could make it to production as a limited edition model.

Paul wrote on July 24, 2015 - 9:16am Permalink
How does that work since water isnt combustible?
Denis Flierl wrote on July 24, 2015 - 5:26pm Permalink
Hey Paul, the system is designed to cool the mixture of fuel and air that become extremely hot inside the engine environment. The system injects a fine mist of water into the collector that reduces the air's temperature to a more optimal temperature, helping the combustion process. Hope this helps...Thanks for reading!