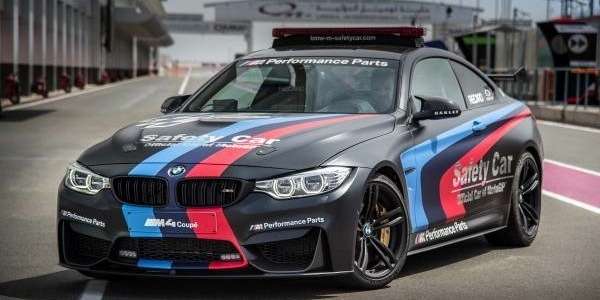 The “Official Car of MotoGP”, the 2015 BMW M4 with innovative water injection took to the track for the first time. How much more power does it get?
Advertisement

BMW introduces innovative water injection technology for the 2015 MotoGP season in the M4 coupe. The 2015 BMW M4 MotoGP Safety car made its premiere at the World Championship in Qatar this past weekend. The BMW M4 is just one of a fleet of six vehicles that the German automaker employs as Safety Cars. BMW says it get more power than the production M4.

BMW says they’ve perfected the technology and it gives the production engine of the M4 (with 431 bhp/317 kW), “a tangible boost in performance.” They don’t disclose exactly how much power the water injected powerplant produces. Check out the video that shows this technology in the 4.0-liter M4 engine.

The system is designed to cool the mixture of fuel and air that become extremely hot inside the engine environment. The system injects a fine mist of water into the collector that reduces the air's temperature to a more optimal temperature, helping the combustion process. BMW says there a number of benefits that include reducing the need for higher octane fuels, controlling the adverse effects of higher ambient temperatures and most importantly, it increases power output and reduces fuel consumption by around eight percent.

Along with the M4 MotoGP Safety car, BMW employs five other safety cars at MotoGP that include the BMW M3 and BMW M6 Gran Coupe, BMW M5, while the new BMW X5 M and the BMW M550d xDrive Touring are used as medical cars. BMW Motorrad also provides two BMW S 1000 RRs as safety bikes. BMW says the new technology and software needed to make the water injection technology in the 2015 BMW M4 actually work, is here now and it will become reality in future production BMWs. Stay tuned.