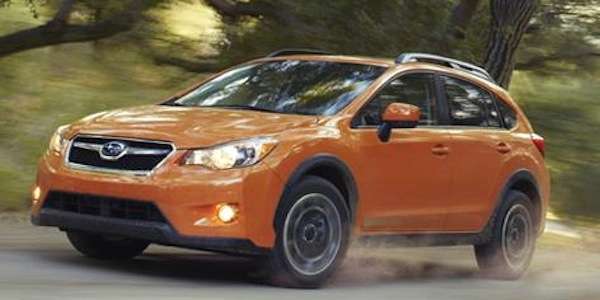 Why Subaru needs to rename the 2015 XV Crosstrek Hybrid

Both the 2015 Subaru XV Crosstrek gasoline and hybrid models feature the Subaru Boxer engine and Symmetrical All-Wheel Drive, but there is a big difference in driving dynamics. The gas model features agile handling and superior maneuverability for a crossover because of the low center of gravity and long-travel independent suspension. But the hybrid model gives quite a bit more fun behind the wheel than the gas model. What makes the XV hybrid a driving enthusiasts crossover?

We drove both the gas and hybrid models and found the hybrid higher on the fun to drive meter. Gas XV models are powered by a 148-horsepower 2.0-liter Boxer engine, mated to Symmetrical AWD via a five-speed manual transmission or available Lineartronic Continuously Variable Transmission (CVT). We drove both models with the new-generation CVT.

Hybrid gets more hp and torque

2015 XV Hybrid gets the same 2.0-liter Subaru Boxer engine, but uses a slightly higher compression ratio (10.8:1) than in the standard gas model (10.5:1), along with reduced-friction piston rings and valve springs and a higher capacity exhaust gas regeneration (EGR) system with an EGR cooler. But it gets an eco-performance boost from the hybrid’s permanent-magnet AC synchronous electric drive motor, which produces 13.4 hp from 1,500 rpm-6,000 rpm. The hybrid gets a 12 hp power bump for a total hybrid system output of 160 hp.

The XV hybrid’s electric motor also contributes 47.9 lb.-ft. of torque from 0-1,500 rpm which gives the hybrid extra power from a standing start. This gives the crossover a total system torque of 163 lb.-ft. at just 2,000 rpm. XV’s equipped with the CVT includes a manual mode with steering wheel paddle switches which contributes to more spirited driving. The system uses a nickel-metal hydride battery and it’s strategically located low in the vehicle, which contributes to greater handling agility. XV hybrid also gets a quicker-ratio electric power steering and special suspension tuning for better cornering ability.

The CVT adds to the fun-to-drive factor?

If you would have told me a CVT automatic would contribute to a sportier driving experience a few years ago, I would have thought you were crazy. But this second-generation CVT increases the fun-to-drive quotient. The XV’s CVT has pre-programmed stepped shifting, making the vehicle feel even sportier and provides an impression of gear ratios. The CVT works in tandem with the Symmetrical AWD and can send additional torque to the rear wheels either proactively or in response to slippage at the front wheels.

While Subaru intended this to be for it’s all-weather capability, it also works on dry roads while pushing hard through the curves. This unique system takes input from acceleration, steering angle and yaw rate sensors, and the Active Torque Split AWD optimizes traction and steering response when accelerating through turns and curves, and particularly when the road surface is slippery.

Subaru hasn’t release pricing on the new 2015 XV Hybrid, but last year’s model had a $4,000 price bump for the hybrid over the standard 2.0i Premium. But the Hybrid does get a 4 mpg increase in city mpg over the standard 2.0-liter XV Crosstrek. But hybrid buyers will get more than an increase in fuel-mileage. The hybrid model gives drivers quite a bit more fun behind the wheel than the gas model.

Subaru has been involved in Rally racing around the globe for decades and the XV Crosstrek Hybrid benefits from this extensive knowledge gained while winning multiple championships. Subaru says the XV stands for “crossover vehicle.” Subaru needs to rename the XV Crosstrek Hybrid and call it the RXV Hybrid, which means RallyCross Vehicle. It’s definitely the highest on the fun-to-drive meter of any crossover on the market.

dave wrote on October 30, 2014 - 1:36pm Permalink
I agree that naming is far more important than automakers realize. At the very least, names should be brief--it is hard for a long name to stick in the customers' heads. XV Crosstrek Hybrid is just a mouthful. Also, names should not just be letters, unless they mean something. I would have been against your RXV name, but the fact that it refers to Subaru's prodigious heritage in Rally racing makes it very meaningful--a good selling point. Speaking of, I don't think Subaru makes use of that Rally heritage as much as it needs to. It likes to sell its cars to granola types--the campers, hikers, etc.--but that is only half the Subaru equation. They've got this amazing other half, which arguably is more real, which is about Subaru winning actual races time and time again, over decades. If Subaru really wants to increase sales, it needs to tap into this for advertising. There's a subaru wrx commercial from a year ago that never aired on TV but was really energizing to watch--I think it would have powered sales not just for wrx but for impreza, because WRX fans are younger than other subie fans and Impreza is also geared to the younger population. So airing that exciting WRX commercial would have powered Impreza sales, which have been lagging. Anyway, yeah, naming is important--RXV is the best alphabetic name I've heard so far.