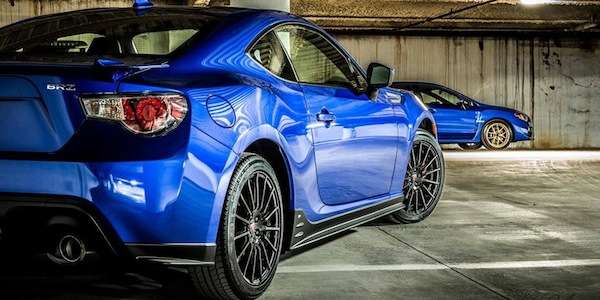 The 2015 Subaru BRZ/FR-S and 2015 WRX are both desirable sports cars. Why did Consumer Reports rank them highest on the fun-to-drive meter?
Advertisement

Consumer Reports says the 2015 Subaru BRZ/FR-S and 2015 Subaru WRX/STI are both the most fun to drive in the Sports/sporty cars category. In fact the three sports cars beat out the Acura ILX, BMW Z4, Chevrolet Camaro and Nissan 370Z who CR says are the least fun cars to drive. CR readily admits that “fun-to-drive” is hard to define and also is a very subjective measure. It can mean different things to different drivers. Not everyone is looking for pure performance and power, and horsepower alone does not make a car fun-to drive.

This performance enthusiast has found that just having a powerful engine and being able to accelerate quickly from a stop light doesn’t translate to the best driving experience. But having a car with handling agility and enough power can be a boat load of fun on the street or track.

Subaru builds some of the most fun-to-drive cars around and Consumer Reports thinks highly of both the Subaru BRZ/FR-S and WRX/STI as sports cars that rate high on the fun-to-drive meter. Here’s how they came up with the factors they say are needed to rank high in this subjective test. CR says in their report, “For us, fun is a combination of factors such as handling response, sound, and the nature of the power delivery that lead to grin-inducing satisfaction.”

Here’s how CR rated the cars

To come up with their list of the “most fun cars to drive”, they first rated the cars according to their scores for handling, steering feel, and body control. Then they looked at acceleration, and found most cars today have plenty of power. Finally, they had a secret ballot they gave to their testers and a chance to “capture those elusive subjective qualities”, including sounds. Below, we present our picks for the cars that are the most and least fun to drive.

What other cars did CR choose?

Subaru has spent decades on the rally courses making the WRX/STI a real performer with handling agility and ability that is known to its loyal fans. BRZ/FR-S is newer to the scene and gets rave reviews for its sporty driving dynamics on the street and track from anyone who drives it. True driving and performance enthusiasts know that having lots of horsepower doesn’t mean that a sports car is fun-to-drive in a majority of driving situations.

Mark Day wrote on November 2, 2014 - 10:00pm Permalink
Regarding the Subaru BRZ, Consumer Reports also wrote: "Reliability is well below average and we can't recommend the BRZ". It received Consumer Reports worst reliability rating.
JeffS wrote on November 3, 2014 - 10:01am Permalink
I agree with the point, "Fun to drive" is a very subjective term. I took out all three of the cars rated the most fun to drive by consumer reports, as stated above, when shopping and they are fun to drive. I bought a 370Z, because I found it to be the most enjoyable and, "Fun to drive". It has some warts for sure, the biggest of which is road noise, but once past the Z's drawbacks, what you are left with is a pure Sports car, which satisfies the driver in you, and enough power to back it up. With the, "sport" package, ups the fun factor exponentially. (Others will argue, but that is not the point, it's what I found to be the most fun for my $, all the ratings, reports and reviews won't change that). What does have an influence is the, "Reliability" ratings, problem areas reported and safety. Even there, it is subjective as to what is important, how many people are driving Kia's even though their safety rating is sub-par. "Fun Factor", purely subjective, I have a friend who owns a Smart car and he says it's the most fun he has ever had in a car and he also owns a Challenger R/T, go figure, to each his own.

Toyota vs Tesla: Which Stock To Buy These Days
For Some Former Daimler Managers Daimler Is Authority, While Tesla Is Like a Startup
END_OF_DOCUMENT_TOKEN_TO_BE_REPLACED