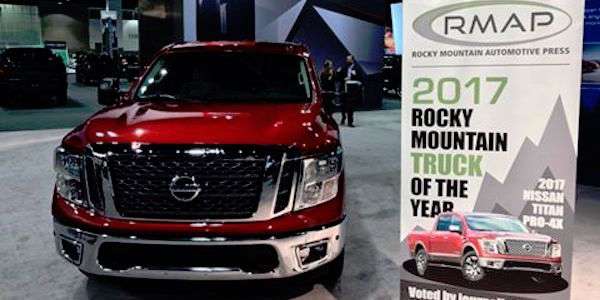 The award was presented in conjunction with the 2017 Denver Auto Show that runs April 5-9. Why was it chosen over other popular trucks? The Titan PRO-4X was selected by RMAP members because it’s the pickup that "best matches the Rocky Mountain lifestyle”. The full-size truck beats the Toyota Tacoma TRD Pro and Honda Ridgeline AWD, to take the independent media award.

Our own review of the Titan PRO-4X, revealed why it’s a good choice for truck buyers in the high-altitude of the Rocky Mountains. We tested both the diesel variant and the 5.6-liter gasoline V8 model. The 5.6-liter gas engine comes with 80 more horsepower than the diesel, giving it a different set of job skills over the diesel. The gas XD is also 700 pounds lighter than the diesel because of its all-aluminum construction and you can feel it under heavy acceleration.

We took it into the high altitude environment west of Denver and found the V8 had power to spare in the rarified air at 9000 feet. We had no trouble passing slower vehicles who were struggling to get up an incline near the steep Georgetown hill on I-70. At least when empty, the 5.6-liter V8 had plenty of grunt.

Nissan developed the Titan XD to tap into the middle ground between half ton and three-quarter ton pickups. They succeeded in building an attractive offering in the gas V8 variant that is capable of handling substantial loads, features a beefier frame and running gear than half-ton trucks, and the ride isn’t as harsh as most heavy-duty trucks.

The 2017 Nissan Titan PRO-4X scores the "2017 Rocky Mountain Truck of the Year” because it matches the Rocky Mountain lifestyle and is a capable work horse at altitude. You can see it at the 2017 Denver Auto Show this weekend. It will begin arriving at Nissan showrooms this spring.