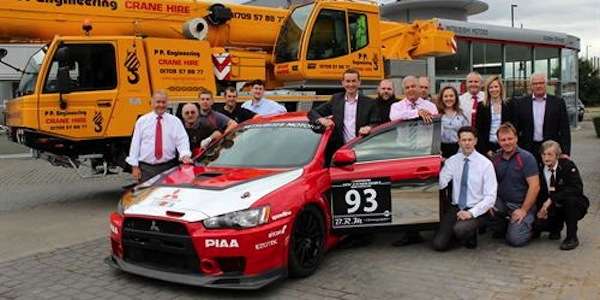 A Mitsubishi Lancer Evolution X rally car was chosen to continue a long-running aerial tradition in Rotherham. Why did it replace a Honda?
Advertisement

With the last 2015 Mitsubishi Lancer Evolution being produced this year, it’s ironic that the Mushroom Garage, which is now home to Gilder Mitsubishi Rotherham, chose the iconic EVO to sit on top of the building. They pulled down a Honda that had been there since 2006 and put up the iconic Lancer EVO rally car.

Mushroom Garage in the UK is well known for having a car on its roof, and a Lancer Evolution X in full rally colors, minus its two-liter turbocharged engine, now sits on top of the Doncaster Road showroom for all those who pass by to see. It was delicate operation performed by a professional crane operating crew.

It’s ironic, because it’s a return to the area for Mitsubishi, and they are putting up a car that no longer will be available for sale in the UK. They didn’t put up a new Mitsubishi Outlander PHEV, but the outgoing performance sedan.

Peter Williams, Director of the Gilder Group, said: “The Mushroom Garage is a landmark building in the area and it’s always been synonymous with having a car on the roof. We are exceptionally enthusiastic about bringing Mitsubishi back to the Mushroom Garage. The EVO is a striking car and having it on our roof will help raise awareness of Mitsubishi’s return to Rotherham.’

For a long time to come, the Mitsubishi Lancer Evolution X will now be sitting on top of the building. Too bad buyers won’t ever be able to buy another performance sedan after the last 2015 Lancer Evolution Final Edition model is sold in the UK.