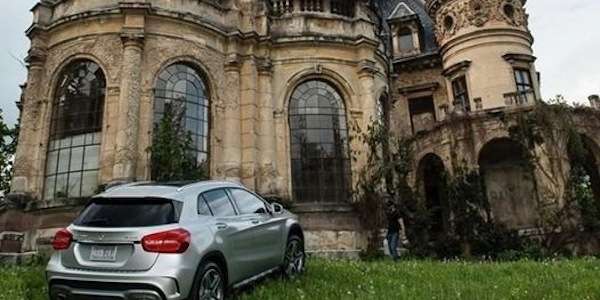 Mercedes-Benz will roll it out the new 2015 GLA-Class and spares no expense in showing it off. Where did they film it?
Advertisement

The Mercedes brand is all about luxury and doing things right and sparing no expense when they do something. The old saying, “if you are going to do something, do it right,” definitely applies to Mercedes-Benz. They are launching the new compact luxury 2015 GLA-Class SUV in September here in the U.S. and you will see their new TV spots airing soon. They will be using some unique backdrops to show off their newest compact luxury vehicle, and they will do it in the best locations around the globe.

The Mercedes-Benz Come production crew took the new 2015 GLA-Class to a German track and a Hungarian mansion for the filming of the all-new GLA’s first two TV commercials. Mercedes wanted to have the best backdrops in the world for their new GLA TV spots and spared no expense to do it. They went around the world seeking the most unique locations to show off their newest compact luxury SUV.

Only the best locations will do for GLA-Class

Mercedes says, “After all, if you’re going to put the best or nothing on film, only the best locations will do.” The spectacular location shows the GLA-Class SUV in front of the Schossberger Castle, built in 1883. The Mercedes film crew was able to get some spectacular outdoor shots on the Hungarian castle’s grounds with the GLA-Class in the foreground.

Mercedes shows off the 2015 GLA250 4MATIC that will start at $33,300 and will be the first offering available here in the U.S. It comes with advanced 4MATIC all-wheel drive, generous ground clearance and space inside for gear and recreation equipment. GLA250 4MATIC also comes standard with Downhill Speed Regulation, a setting that optimizes the throttle and transmission while driving in tough conditions.

GLA will be a global offering

The new luxury compact SUV gets a progressive design that will allow new millennial buyers to use it for daily commuting during the week, and use it for recreation on the weekends. It’s small and compact enough for city commutes and tough enough with 4MATIC all-wheel-drive for off-road adventures around the globe. This new SUV won’t be sitting in the garage on weekends. Young millennials will be drawn to the new compact SUV who lead active lifestyles and they can use it to get them to the trailhead.

The eagerly-awaited entry level compact 2015 Mercedes-Benz GLA250 4MATIC will be available here in the U.S. in September and Mercedes is expecting the luxury compact to be a big hit with younger buyers. Just like the new 2014 CLA-Class, it will attract non-luxury car buyers to the brand. It comes with new pricing that should make it an attractive offering with a new generation of active global buyers looking to buy their first luxury vehicle. Mercedes chose these sensational global locations to show off their new GLA-Class and to put the best on film in the best locations.

Check out the new 2015 GLA-Class configurator here and build your own model.

GTI Bob wrote on August 7, 2014 - 2:10pm Permalink
It's a beautiful car and I seriously considered it. But the 33.3k stripped price bloats to 48k with all the must have extras, excluding tax, licence, dealer charge. Oh, and your insurance premium going up. Not to mention no free maintenance offfer. Trading my Tiguan in for a new, fully loaded GTI. Laughing all the way to the bank. Mercedes needs a reality check.
Lynne wrote on January 10, 2015 - 7:03pm Permalink
We want to know where the "elephant ear" train shot was filmed, please...Germany? Is that the reference to the "German track" at the beginning of this post? If so, then where, specifically was that "German track"? Thanks.