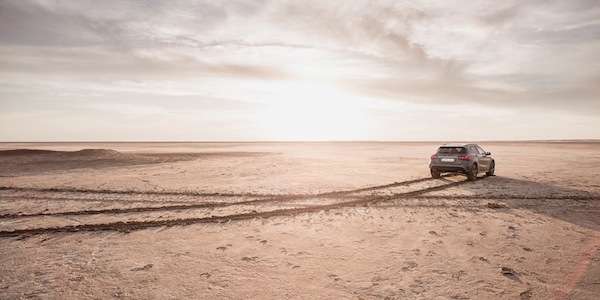 Why 2015 Mercedes GLA-Class represents freedom to a new generation

Why would Mercedes test the 2015 GLA-Class in Tunisia? Because this extreme environment shows its cross-country mobility.
Advertisement

Isn’t the new 2015 Mercedes-Benz GLA-Class compact SUV only about luxury? Why would Mercedes take the all-new GLA-Class to Tunisia and test the new compact luxury SUV in Tunisia among salt lakes, herds of camels and shifting sand dunes? Because they can show how the new GLA performs with its new-generation 4MATIC and that it’s not too soft for extreme environments. And that it represents freedom to a new generation of global buyers.

Mercedes-Benz took the new 2015 GLA-Class cross-country in Tanisia, the northernmost country in Africa. The country is bordered by Algeria to the west, Libya to the south and the Mediterranean Sea to the northeast. Mercedes GLA had to contend with both the Atlas Mountains and the Sahara desert as it made its trek across the small northern African country. What is Mercedes trying to prove?

Mercedes-Benz created the new 2015 GLA-Class for a new generation of active millennial consumers who have never purchased a Mercedes vehicle before. Just like the new CLA-Class four-door coupe, the GLA is attracting new buyers to the German luxury brand. With GLA, its all about conveying the freedom that the new compact SUV offers. It had a go-anywhere attitude for young active buyers.

The GLA-Class will be a global vehicle and it opens up the world to this new generation of adventure seekers and freedom lovers. The new GLA creates a new segment in the luxury compact SUV market. It’s a sporty new entry into an untapped market and Mercedes is leading the way. The all-new 2015 GLA with their new-gen 4MATIC is what Mercedes is showing off in Tunisia.

The 2015 GLA-Class is the first Mercedes to be available with the new-generation all-wheel-drive 4MATIC with fully variable torque distribution. The new system features a power take-off to the rear axle that is integrated into the seven-speed dual clutch automatic transmission, and the rear-axle gear with integrated, electrohydraulically controlled multi-disc clutch. The new-generation 4MATIC has a lower weight and also allows fully variable distribution of the drive torque between front and rear axles.

GLA is appealing to young active buyers who will use the premium compact SUV for commuting and recreation. Most millennials will use the GLA for daily urban commutes during the week and for watersports and mountain activities on the weekend. It looks like Mercedes hit the right formula with the new GLA premium SUV. Taking the all-new 2015 Mercedes-Benz GLA-Class to Tunisia, is the ideal place on the planet to test its all-wheel drive and cross-country capabilities.