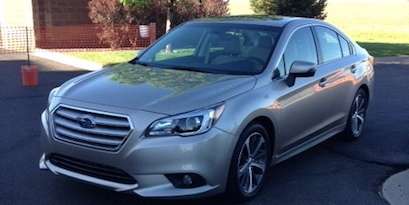 The 2015 Subaru Legacy sedan was at RMDE and we got a chance to preview the new fifth-generation model. Why choose it over the 2014 Dodge Challenger Shaker?
Advertisement

Call me crazy, but I chose to drive the 2015 Subaru Legacy sedan over the 2014 Dodge Challenger Shaker on the way to High Plains Raceway (HPR) for the track day experience. Why did I do this? As we prepared to leave for the Rocky Mountain Drive Experience (RMDE) track day, Will Smith, COO of Rocky Mountain Redline fleet service, offered me the chance to drive the 2014 Dodge Challenger Shaker.

I knew the new 2015 Subaru Legacy was at the event, and I told Will to get me the keys to the new silver sedan. I knew I would be driving the Dodge Challenger Shaker at HPR during the track event, but I wouldn’t have a chance to drive the new Legacy sedan and talk with Andrew Ganz, Subaru Press Fleet PR account manager who rode with me for our 50 minute ride to the track. Here’s what I found out on the drive to HPR.

The first thing I noticed as we got up to 75 mph on I-70 was the quiet cabin. Andrew told me Legacy now comes with a new acoustic windshield and received extra foam insulation and floor damping material to quiet the ride. He also said the new model gets liquid-filled engine mounts, thicker panels in the floor, toeboard, rear wheel apron and inner fenders. I could definitely tell the difference is noise level over the outgoing model.

New Safety and Security on 2015 Legacy

As we drove, Andrew pointed out the new-generation EyeSight safety system that is located high on the windshield. As I asked about the location of the system, he pointed out that the new system is located there to enable it to better see red tail lights on vehicles stopped ahead. It’s also strategically located high on the windshield to keep it free of ice and snow during the winter months. Most automakers have the sensors located on the front bumper where they can become covered with dirt, ice and snow and become useless until cleaned. Andrew told me Legacy’s windshield wipers automatically keep the sensors clean with every swipe keeping the safety system working at peak efficiency. It’s also located there to reduce replacement costs in the case of a minor collision of the front bumper. Brilliant.

He also pointed out the new type of airbag restraint that is located on the front seat cushions. This new front seat-cushion airbag keeps the driver and front passenger firmly planted in the seat in case of a front end collision. A new rollover sensor can also deploy the side curtain airbags if an imminent rollover is detected.

Other features that Andrew pointed out that would be missed in most test drives, is the new smaller front pillars. They are thinner and new glass in front of the side windows is now used to improve driver visibility. Subaru also moved the side mirrors back for greater side view visibility. It’s the little things that can make a big difference in driver safety and enjoyment. Andrew also pointed out the new Rear Cross Traffic Alert that detects vehicles approaching from a perpendicular direction while reversing, such as from a driveway or parking lot space.

As we drove, Andrew showed me the new 2015 Legacy Infotainment System. Subaru has significantly upgraded infotainment capability in the new-generation sedan. The Upgraded Infotainment System for the Legacy 3.6R Limited features a 6-speaker audio system, 7-inch touch screen display with multi-touch control that offers swipe and scrolling gesture control. Andrew demonstrated how easy it is to swipe the screen with your fingers and navigate through functions and screens easily. It also features other new technology like voice-activated controls, a vehicle information display, SMS text messaging, iTunes tagging capability and dual USB ports.

As I rode those 50 minutes with Andrew Ganz in the 2015 Subaru Legacy to the RMDE track day, I learned much new information about the new-generation sedan. Would I do it again if I had the chance to drive the 2014 Dodge Challenger Shaker? Absolutely. I will be getting the new Legacy sedan soon for a week-long test drive. Stay tuned to Torque News for a full review.