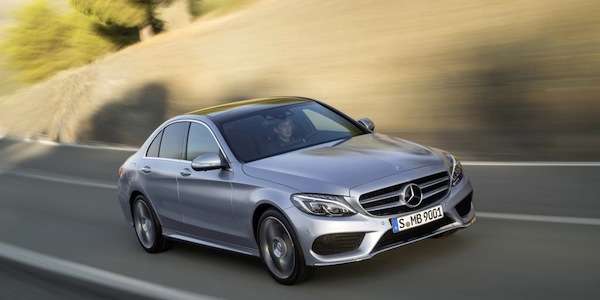 The all-new 2015 Mercedes-Benz C-Class is getting ready to make its dealer launch here in the U.S. Why does it have BMW worried?
Advertisement

The U.S. is Mercedes-Benz’ single largest market in the world and the new-generation 2015 C-Class will continue to be the leader. The new C-Class is a global car and Mercedes will market the car on four continents. The new C-Class is the first sedan to be produced in the German automakers U.S. plant in Tuscaloosa, Alabama. Mercedes is gearing up for the new C to be a big hit with U.S. luxury buyers.

Mercedes-Benz has spent over $2 billion on the Alabama plant to expand capacity for the C-Class along with other models. Demand for luxury automobiles is on the increase worldwide and Mercedes has positioned themselves to take advantage. The 2015 C-Class will be the first Mercedes-Benz model to be produced in four continents. The model is already being manufactured in Germany and South Africa, and will begin production in the U.S. and China later this year.

Mercedes reimagined what the C-Class could be

Mercedes engineers and designers started with a clean drawing board and completely redesigned the popular luxury sedan. The C-Class is the volume leader in the U.S. and Mercedes isn’t sitting on past success. Mercedes says they “reimagined what the C-Class could be and how it can shape the industry.” The new C-Class is another example of how the German automaker is shaping the industry with their new offerings.

You stay a leader by not being satisfied with where you are. The new 2015 Mercedes C-Class is a good example of what an industry leader does to stay on top. Mercedes is still behind leader BMW here in the U.S., but the new C-Class will help them move into the number one luxury car sales spot by the end of 2015.

Mercedes will use new C-Class to catch BMW

According to a story in Forbes, Mercedes trails BMW in passenger car volumes in the U.S., and that is mainly due to higher sales of the 3- and 4-series compact sedans, in comparison to the outgoing C-Class model. With the launch of the new 2015 C-Class in the U.S., Mercedes will aim to improve passenger car volumes in the last quarter of the year in order to narrow its current gap with BMW.

Mercedes will launch the new 2015 C-Class here in the U.S. in September. The new C comes on line in China later this year also. Look for the 2015 Mercedes-Benz C-Class to shape the global luxury car market and help the German automaker become the number one global leader in luxury car sales.

Other 2015 Mercedes-Benz C-Class stories of interest.
The global 2015 Mercedes C-Class will stay the volume leader

In the video below, you'll get a closer look at the latest creation to leap off the Mercedes-Benz drawing boards, and send BMW scrambling back to theirs.