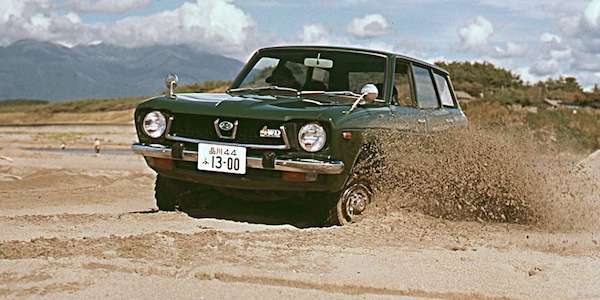 Where the record-setting 2016 Subaru Forester got its start

The 2016 Subaru Forester is a big success and the compact SUV just had its best month ever. What vehicle started it all for Subaru?
Advertisement

The Subaru Forester is selling like hot cakes in the U.S. as Subaru of America reports the small SUV had its best month ever in sales. It’s also the 25th consecutive month of more than 10,000 Foresters that have been sold. It’s not just Forester, because Subaru’s XV Crosstrek crossover, Impreza compact and WRX/STI performance cars also achieved their best August ever. What vehicle started the all-wheel-drive niche for the Japanese automaker?

It all started back on September 1, 1972 when Fuji Heavy Industries, maker of Subaru cars, introduced the Subaru Leone 4WD Station Wagon that started the all-wheel-drive vehicle niche for the Subaru brand. It was small, ugly and the automotive world didn’t know what to think.

The Leone 4WD Station Wagon was the world’s first mass-produced 4WD passenger vehicle. It was this model that created the passenger 4WD category that makes up a major segment of the market around the globe today. The small 4WD multi-purpose vehicle caught on in snowy and mountainous areas, proving popular among a younger generation of skiers, camping and hiking enthusiasts and others who enjoyed an outdoor lifestyle.

The high-performance 4WD sports models were developed soon after and these models helped to broaden the passenger 4WD segment dramatically. Today, the WRX/STI performance sedans and hatchbacks have a cult-like following around the globe and they also had their best August ever in the U.S.

Subaru developed this niche market with three core values, of all-wheel-drive, boxer engines and safety technology. Subaru Global says they developed this new category by “responding to customer requests from an early stage, and releases innovative car designs that give owners a greater degree of freedom.” It’s the same philosophy which drives the automaker today.

Demand for the new 2016 Subaru Forester is as strong as ever as it sets new sales records in August. It all started with the Subaru Leone 4WD Station Wagon back on September 1,1972.