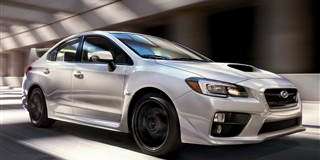 The 2015 Subaru WRX / STI is selling like hot cakes. But what’s the the number 1 question fans are still asking?
Advertisement

The 2015 Subaru WRX and WRX STI have been a big hit globally and the performance cars are selling at a record clip. Canada reports the new-generation performance car sales rose over last September with increases of 13.2 percent. Subaru of America reported an increase of 33.2 percent year to date for 2015 WRX/STI. But WRX/STI fans are still asking one burning question. When will they bring back the 5-door hatchback?

With Subaru of America, Fuji Heavy Industries (FHI) largest WRX/STI market, posting record-breaking sales every year for the past six years, it’s hard to argue with their decisions. Their lineup is experiencing record growth and Subaru executives seem to “pulling all the right strings” for FHI. Their biggest issue seems to be how to ramp up production to keep up with demand for their AWD multi-use vehicles.

The decision by Subaru to drop the 5-door hatchback from the WRX/STI lineup doesn’t seem to be affecting sales. Fans are responding to the new WRX/STI performance models and are buying them as fast as they arrive. Fans are responding well to the new updated styling inside and out and the new 2.0-liter turbo engine on WRX. Both performance models received significant upgrades to the chassis with improved driving dynamics. A new breed of buyer is also buying the new WRX/STI.

But many WRX/STI fans have been upset that Subaru has “temporarily” suspended production of the hatch model in WRX and WRX STI. It’s still the number 1 burning question fans have about the new-generation sports cars. Fans like the versatility and utility that the hatch body style provides. Most WRX/STI buyers lead active lifestyles and use the performance car for many weekend activities like transporting mountain bikes, snowboards, and surfboards for use on the weekends.

North America is the world’s biggest WRX/STI market (followed by Japan and Australia), so it’s understandable Subaru has not ruled out adding a hatch body style to the performance car. Subaru knows they have alienated many of their faithful hatchback fans and need to offer the five-door in the top three WRX/STI markets which are U.S., Japan and Australia.

The hatchback was 50 percent of the sales

Half of all WRX/STI sales in the U.S. were hatchbacks and Subaru is hearing it from those performance fans who want the utility and versatility that the body style offers. WRX Project General Manager, Masuo Takatsu, told Motoring.com.au “We have received strong interest from the US, where the hatchback was 50 percent (of previous-generation WRX sales), so we're now considering it.”

FHI's decision to drop the 5-door hatchback from the 2015 Subaru WRX and WRX STI lineup has not hurt sales and performance buyers are snatching up the new sedans in big numbers. The WRX/STI hatch will likely be back as soon as Subaru can ramp up production capabilities to keep up with growing demand for all their cars. But it’s still the number 1 question fans have for Subaru. When will you bring back the WRX/STI hatchback?

Other 2015 Subaru WRX STI stories of interest.
When will Subaru correct the mistake of dropping the 2015 WRX/STI hatchback?