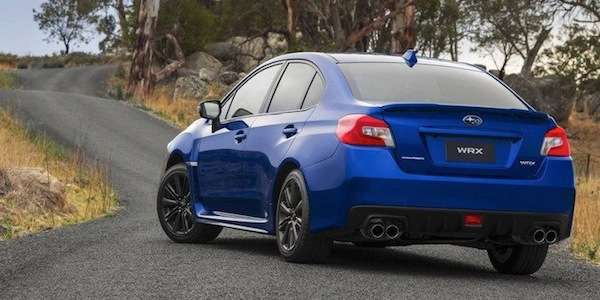 Will Subaru correct the mistake of dropping the 2015 WRX/STI hatchback?

Subaru dropped the five-door hatchback model for the new-generation 2015 WRX and WRX STI. Will they ever bring it back?
Advertisement

It looks like Subaru is reconsidering bringing back the 5-door hatchback which they dropped for the new-generation 2015 WRX and WRX STI. They only offer the 2015 WRX/STI in the sedan variant but that could be changing according to a report from Motoring.com.au in Australia. That’s good news for WRX/STI hatchback enthusiasts around the globe. And especially here in the U.S. where Subaru sold the most 5-door performance models.

WRX Project General Manager, Masuo Takatsu, told Motoring.com.au at this week’s Australian launch of the fourth-generation model, that a five-door body style was still under consideration. That should be no surprise as the there has been a strong backlash here in the U.S. and other markets from WRX/STI fans who want a hatchback in the performance models.

Subaru knows they have alienated many of their faithful hatchback fans and need to offer the five-door in the top three WRX/STI markets which are U.S., Japan and Australia. Half of all WRX/STI sales in the U.S. were hatchbacks and Subaru is hearing it from those performance fans who want the utility and versatility that the body style offers. “We have received strong interest from the US, where the hatchback was 50 percent (of previous-generation WRX sales), so we're now considering it,” Takatsu said.

North America is the world’s biggest WRX/STI market (followed by Japan and Australia), so it’s understandable Subaru has not ruled out adding a hatch body style to the performance car. “The main target for WRX/STI is the U.S.,” said Takatsu. “Japan is number two, Australia number three. Basically, we target these three markets.”

Masuo Takatsu who was recently in the U.S. for the WRX/STI launch, said “limited engineering resources” were behind both the lack of new WRX hatch and an automatic version of the upcoming STI. Subaru has been busy bringing out the new 2015 WRX/STI, new 2015 Legacy sedan and new 2015 Outback wagon this year.

Why is it such a big deal for Subaru to reconsider offering a five-door hatch in addition to the sedan? For Subaru buyers, it’s all about the versatility and utility that the hatchback offers. Performance fans use their cars for everything and they love the extra functionality that the hatch offers. In addition to offering performance, it offers buyers to use the WRX/STI for multi-purposes. It can be used for recreational activities like transporting mountain bikes, snowboards, and surfboards for use on the weekends.

Subaru is attracting a new buyer with the 2015 WRX and WRX STI beyond the loyal fans. But if they want to keep their loyal fans happy they need to bring back the five-door hatch. It looks like Subaru is listening to their performance fans and will bring it back in the next two years. Maybe we’ll see the WRX/STI hatch by 2017.

Other 2015 Subaru WRX/STI stories of interest.

Carl wrote on March 31, 2014 - 1:31pm Permalink
The thing is - the WRX and STI are limited production sports cars. Subaru simply doesn't have the physical production capability to make that many of both models - not when you have dealers right now completely out of 2014 Foresters (and none expected on the ground for almost two weeks) and in nearly the same shape for XV Crosstreks. 2013 over 2012 showed an increase of over 90,000 cars sold. Yes, the WRX and STI are great cars - but we're talking about only 18,000 cars total between the two of them. So Mr. Takatsu is exactly right - Subaru is experiencing a side effect of it's own success right now. Be patient - it'll certainly help when SIA gets retooled and can produce more cars, but right now Subaru simply needs more production facilities because car buyers around the world are realizing that the best value on the car market right now is a new Subaru.
Kumar wrote on April 1, 2014 - 11:41am Permalink
Isn't the Levorg essentially a WRX wagon? That would work for me in place of a WRX hatch if they brought it stateside. It's about the same size as the previous gen Outbacks that were replaced by the larger current models.
Salim wrote on May 6, 2014 - 10:59am Permalink
It wouldn't work for me. I would probably clip that massive rear overhang when I slide around in gravel.
Mark wrote on April 26, 2014 - 9:14am Permalink
We have always had a couple of Subaru cars. Just traded the 05 Forrester for a 2014 Legacy 3.6R for my wife and sold my 04 Impreza TS to a good friend - intended on buying a 2015 STI Wagon. No wagon - well my Subaru now becomes a Honda for a replacement. Fail to bring back the wagon and you just lost another long term owner. The 2.0 engine is also too gutless for me to own, so it looks like the appeal for many of the 2014's and up is going down-hill fast.
Carl wrote on April 26, 2014 - 11:46am Permalink
If you're driving a regular 2.0 liter - like in the Imprezza or XV Crosstrek - sure, it's a nice little commuter engine, but it's not designed to be a sports car. The 2.0 liter turbo that's in the Forester XT (250 HP) and now in the 2015 WRX (268 HP) is a great engine with plenty of get up and go. Of course, don't forget that the 2015 STI does NOT have the 2.0 liter - it - it still has the 2.5 liter 305 HP that had last model year. We suspect that once the plant in Indiana is re-tooled so it can produce the Crosstrek, that will free up production in Japan so they can again run the 5 door - with the sales goals that were announced when the 2015 Outback premiered, I think FHI simply needs to build or retool another production facility to produce cars at this point.