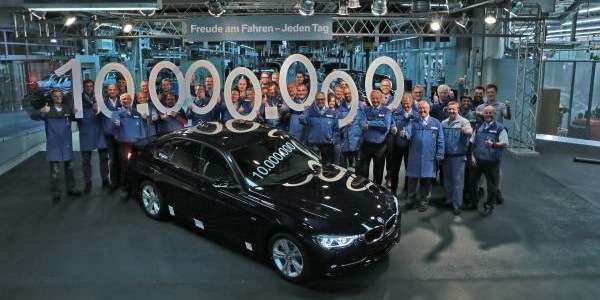 The BMW Group Plant plant in Munich rolls out its ten millionth BMW 3 Series Sedan. What makes the 3 Series the best-selling BMW of all time?
Advertisement

The ten millionth BMW 3 Series to roll off the assembly line in Munich, Germany was a new 2016 BMW 320d in Imperial Blue. The landmark occasion was marked by a celebration for the milestone reached this week. Production of the 2016 BMW 3 Series Sedan was launched just recently, in July and the iconic car is celebrating 40 years for the brand.

BMW says they have produced more than 14 million cars of this model series, more than half of them BMW 3 Series Sedans. It’s the German automakers most successful car in the lineup and the Munich plant pumps out 1,000 cars a day, half of them BMW 3 Series. To meet the strong demand for the 3 Series, the brand also manufactures the popular sedan at its other German plants in Regensburg and Dingolfing and also in Rosslyn (South Africa) and Tiexi (China).

What keeps the 3 Series number one?

BMW has not forgotten what their core values are and have kept the 3 Series responsive, compact, fun to drive and connected to the driver. The new 2016 model gets upgrades to the engines and BMW also upgraded the chassis and suspension and replaced the three-link suspension setup at each corner with a five-link setup. BMW says the new setup stiffened the chassis without any penalty to ride comfort. BMW also fitted a revised electric power-steering system, which is meant to give better feedback and response.

The BMW M3 takes everything up a few notches for performance enthusiasts and is a good daily driver that owners could also take to the track and drive hard. The original philosophy of the M3 was to be a track-capable car. That’s still the M3/M4 philosophy today we see in the 2015 M3/M4 fifth-generation car.

BMW Group developers began working on the new 3 Series model series in 1970 and it became the most successful BMW. After five years of development, production of the global bestseller was launched in June 1975. BMW added other variants a few years later, but the sedan has continued to be the best-selling model.

It’s not a surprise that the 2016 BMW 3 Series continues to be the brands top seller after 40 years. The 3 Series Sedan is an icon for the German automaker and remains to this day the quintessential BMW. This week the Munich plant rolled out the ten millionth BMW 3 Series Sedan.