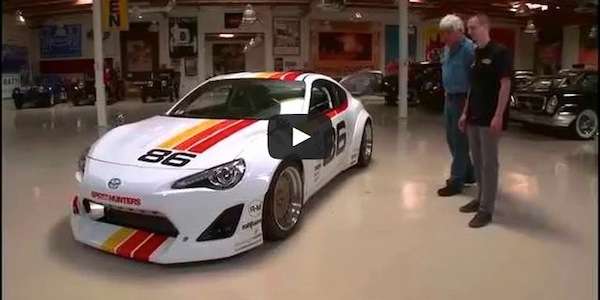 Jay Leno invited Keith Charvonia, technical editor at Speedhunters and his 2015 Scion FR-S “Maximum Attack” to his garage for an interview and the first shake down of the sports coupe. This car was the winner of The Scion Tuner Challenge at the 2014 SEMA Show last November. Leno is impressed with the 300 horsepower FR-S and keeps calling it a Toyota.

Speedhunters, who is an international collective of photographers, writers and drivers took a new 2015 Scion FR-S called “Maximum Attack” and showed the world what you can do with 90 days and nights, $15,000 and lots of hard work. This 2014 Scion FR-S was built by three performance enthusiasts in a two-car garage, after work. They customized everything on the car and came up with their Cosworth-supercharged, ‘70s IMSA-inspired FR-S.

Jay Leno invites Keith to his garage, who was there two years earlier with a Kaiser that he built before the Scion FR-S. On Jay Leno’s Garage video below, Charvonia said, “My goal was to customize the FR-S with a 1970s, IMSA style look to it, and I’m incredibly pleased with what we were able to produce.”

For The Scion Tuner Challenge, Speedhunters went against two big shops, Super Street and GT Channel, who had complete shops to build their cars. The Speedhunters “Maximum Attack” 2015 Scion FR-S was built in Keith’s two car garage equipped with a small lift and a welder. Speedhunters were the winners in spite of all the challenges.

Speedhunters had tough competition at SEMA but came away with the winning FR-S with its custom louvre treatment and vintage IMSA-inspired styling. With just a 90-days to pull it off, the three media partners received a...read more.

Leno gets into the turbo when he gets the car off the main highway and onto a two lane curvy canyon road. It’s funny because Leno keeps calling the 2015 Scion FR-S a Toyota. Leno says while on the street, “It doesn’t sound like any Toyota I know.” Later on after driving fast on the canyon road, Leno says, “It’s not a Toyota, it’s a race car.”

Watch Jay Leno get behind the wheel of the “Maximum Attack” Scion FR-S and see what happens next.