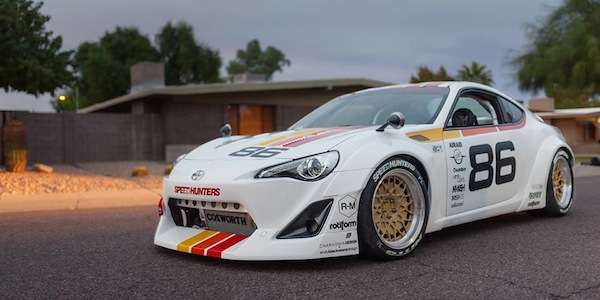 The Scion Tuner Challenge was won by Speedhunters who took the new 2014 Scion FR-S and turned it into something special. See why it's called “Maximum Attack”
Advertisement

This has to be a tuners dream, to take a new Scion FR-S sports car, $15,000 and have 90 days to turn it into something special for the SEMA Show. This was the 10th annual Scion Tuner Challenge at the Specialty Equipment Market Association (SEMA) Show in Las Vegas. Speedhunters was the winner of the challenge and won $10,000 for their efforts.

Speedhunters, who is an international collective of photographers, writers and drivers took a new Scion FR-S called “Maximum Attack” and showed the world what you can do with 90 days and nights, $15,000 and lots of hard work. This 2014 Scion FR-S was built by three performance enthusiasts in a two-car garage, after work. They customized everything on the car and came up with their Cosworth-supercharged, ‘70s IMSA-inspired FR-S.

Speedhunters had some tough competition at SEMA but came away with the winning FR-S with its custom louvre treatment and vintage IMSA-inspired styling. With just a 90-days to pull it off, the three media partners received a stock 2014 Scion FR-S and $15,000 to bring their ideas to life. The two other competitors were Super Street, a magazine dedicated to covering high-performance customized cars and lifestyle, and GT Channel, a car video network focused on drifting videos, car racing and new vehicle tests.

FR-S is the perfect platform for tuners

Speedhunter’s creative “Maximum Attack” 2014 Scion FR-S was labor-intensive and stood out to the judges as something fans would love to see at the SEMA show. Landy Joe, Scion auto shows and special events manager said, “Each team took the Scion FR-S Series 1.0 to new heights and proved that just about anything is possible when it comes to this vehicle.”

The Speedhunters trio wanted to bring several styles and racing heritage together on their “Maximum Attack” FR-S. They did it by adding new overfenders from KM4SH, as part of a special edition kit designed by Kei Miura. The custom louvre treatment from Hot Rod Central added the vintage styling they were after.

“My goal was to customize the FR-S with a 1970s, IMSA style look to it, and I’m incredibly pleased with what we were able to produce,” said Keith Charvonia, technical editor at Speedhunters. “It feels awesome to take home this victory for the Speedhunters team.”

Speedhunters took the new 2014 Scion FR-S and the retro-inspired build won the 10th annual Scion Tuner Challenge at the Specialty Equipment Market Association Show in Las Vegas. Congratulations to the team as all their hard work payed off! Now we would like to see how this tuned FR-S handles on the track.