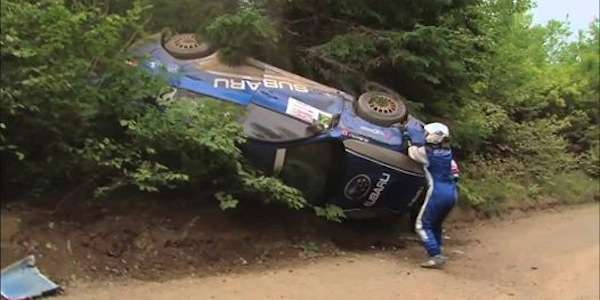 Watch this video of a Subaru WRX STI at a 2010 Canadian Rally Championship race. What happens is amazing.
Advertisement

Back in 2010 at the Rallye Baie Chaleurs, Subaru WRX STI rally driver Pat Richard and co-pilot Alan Ockwell had a harrowing experience. As they are navigating round three of the rally stage, Richard looses control and they flip the car over on its top. But what happens next is nothing short of amazing.

The cameras capture the whole crash

The onboard camera and race course cameras capture the classic Subaru WRX STI navigate the tight corner as they cut the corner a bit too close. The car flips over on its side and comes to rest in the trees that line the course at Rallye Baie Chaleurs in Canada.

There’s no quit in Richard

The on board camera catches the whole event as the car rolls and the cabin fills with dust and dirt from the crash. But Pat Richard has the lead and isn’t about to quit now. With co-pilot Alan Ockwell still strapped into his safety harness, Richard opens his door and jumps out of the wrecked WRX STI.

Ockwell is shaken but ready to roll

Richard grabs onto the rear of the rally car and pulls it back onto its side. A group of fans who are watching race see his dilemma and come to the rescue. The group of 8-10 rally fans help Richard push the car back onto its wheels. Ockwell is still strapped in the WRX STI and gathers his wits and clears away the debret so they can continue on.

The damaged WRX STI is still able to finish

Even though the WRX STI Rally car is damaged and smoking, Richard takes off unfazed and finishes the race. The duo not only finish the race, but they go on to win first place in the event. The video below shows both the in car shot, as well as slow-motion roll footage.