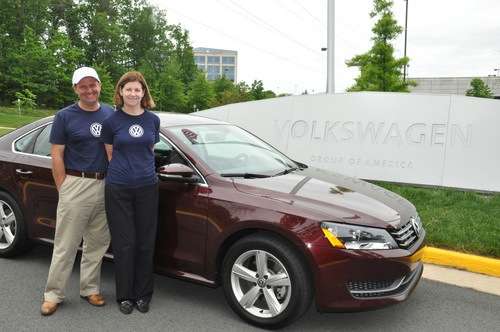 VW Passat drives 1,626 miles on one tank of fuel

John and Helen Taylor broke the world record last week for the farthest distance ever traveled on a single tank of fuel. They took a Volkswagen Passat and drove 1,626 miles from Houston, TX to Sterling, Virginia on May 3rd to the 5th, and never stopped for fuel. The vehicle they used was a factory 2012 Passat TDI diesel with a six-speed manual transmission. The couple was able to average an incredible 84.1 mpg during the three-day trip.

The previous record for the most miles covered on a single tank of diesel was 1526.6 miles, achieved with a VW Passat 1.6 BlueMotion diesel in Europe. The couple didn’t strip the seats out of the vehicle or take anything else out in order to reduce weight, but included 120 pounds of luggage and drove during daylight hours to experience normal traffic situations.

The Taylors were not put up to this by Volkswagen, but the couple is not new to the high mileage game. And if you think you can achieve mileage like this, think again, because the Taylor’s are professionals. They have previously set the "48 Contiguous U.S. States Fuel Economy Guinness World Record”, and often run workshops on driving efficiently. The also run a website called Fuel Academy.

Of course Volkswagen is touting the benefits of their clean diesel TDI four-cylinder engine. EPA fuel-mileage estimates are 43 mpg highway for the Passat’s 2.0-liter diesel engine that makes 140 horsepower and 236 pound-feet of torque and with a manual transmission. The Taylor’s are professional fuel-mileage experts, and they chose to drive the 2012 Volkswagen Passat TDI diesel for a good reason. Diesel engines are the most environmentally friendly power source available today. Diesel engines have been widely used in Europe for decades and this is what they drive; small, maneuverable, fuel efficient diesel cars.

Ford of Europe has just introduced the all-new Fiesta ECOnetic Technology and says the new diesel will achieve 86.5 mpg. Unfortunately, the new Ford Fiesta will not be available here in North America. But there are numerous diesel cars being sold in North America, and Volkswagen is a leader in getting their cars certified by the EPA here in the U.S.

Allen Schaeffer, Executive Director of the Diesel Technology Forum, said "American drivers are recognizing the environmental benefits of the new clean diesel technology.” Earlier this month, the Mercedes-Benz S 250 CDI BlueEFFICIENCY clean diesel received the prestigious '2012 World Green Car' award during the New York International Auto Show. This followed the January announcement that the 2012 Volkswagen Passat TDI clean diesel had been selected the '2012 Earth, Wind & Power Car of the Year for Most Earth Friendly' automobile, and was also named Motor Trend’s 2012 Car of the Year.

As gas prices continue to climb here in the U.S., Americans will continue to embrace the new clean, fuel-efficient diesel technology that is here to stay.

Anonymous bob wrote on May 10, 2012 - 7:00pm Permalink
There is no way a tdi vw will get that mpg. They are not on interstate at 70 mph.
Aaron Turpen wrote on May 10, 2012 - 11:40pm Permalink
I'll be test driving one of these next week here in Wyoming where the interstate speed limit is 75mph. I'll let you know what kind of mileage it gets.
Aaron Turpen wrote on June 2, 2012 - 10:01pm Permalink
Following up, on one tank of fuel I managed 820 miles without trying (no eco-driving, I punched it a LOT and no hypermiling of any kind). So I think doubling that would be feasible.
Paul wrote on May 11, 2012 - 2:16am Permalink
Just wait until we start seeing diesel elective hybrids. They've been doing it in trains for years.
Aaron Turpen wrote on May 11, 2012 - 12:55pm Permalink
There's a big difference between the way a train operates and the way current diesel-electrics (like the Citroen DS5) operate. Still, you're right. A diesel engine as a generator is way more efficient than a gasoline engine for that purpose. So a car like the Chevy Volt or Fisker Karma would be a lot more efficient with a TDI under the hood than it is with a gas engine. A Prius? Not so much.
Anonymous wrote on June 2, 2012 - 3:15pm Permalink
Fiesta ECOnetic Technology , so why is this car not offered in the USA if it is so fuel efficient ? we need more cars with this kind of milage availale to us with such high fuel prices. Vw still offers great mileage, my 2011 jetta averages about 30 miles gallon of gas.