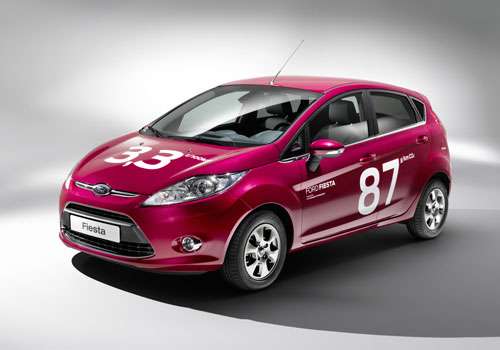 Ford has begun production of its most fuel efficient car ever, 86 mpg

Ford of Europe has begun production of the new Fiesta ECOnetic Technology, its most fuel-efficient, greenest car ever.
Advertisement

How would you like to get 86 mpg with a non-electric non-hybrid car? The technology is here today and Ford of Europe has just announced production of the new Fiesta with ECOnetic Technology that will achieve 86.5 mpg. Unfortunately, the new Ford Fiesta will not be available here in North America. Ford has just begun production of the fuel-sipping Fiesta at Ford’s Cologne Assembly plant in Germany.

Fiesta ECOnetic Technology is a fancy name for an engine technology that isn’t really all that new, it just hasn’t been accepted here in the U.S. yet. It’s called a diesel engine. Diesel engines have been used in Europe for decades and this is what they drive; small, maneuverable, fuel efficient diesel cars. And as diesel technology continues to evolve, we’ll continue to see diesel engines being used more.

In fact, Ford has plans to expand the ECOnetic Technology throughout Europe, estimating that half of European Fords sold by the end of this year will have the ECOnetic badge, and two-thirds next year. So why isn’t this technology being used more in North America? Gas prices haven’t reached the same levels that the rest of the world pays. But as they continue to climb, Americans will begin to embrace the diesel engine.

The days of diesels belching out black smoke and dirty tailpipes are a thing of the past. The new Fiesta is not only Ford’s most fuel-efficient car, it’s their lowest CO2 emitting car to date as well. Ford has committed to reduce CO2 emissions in its cars by 30 percent by the year 2020. “Fiesta is already hugely successful across Europe and the ECOnetic Technology model takes its fuel efficiency and low-CO2 offering to another level,” said Stephen Odell, CEO and chairman, Ford of Europe.

Ford accomplishes 86.5 mpg with a 1.6-liter Duratorq TDCi diesel that uses other fuel saving features like specially set engine calibration and gear ratios, Auto-Start-Stop (the vehicle shuts down when idling), Smart Regenerative Charging (uses braking energy to recharge the battery), and Eco Mode, software that makes suggestions on how to drive more economically.

Ford’s also uses slippery aerodynamics to achieve better mileage. The suspension has been lowered, and the vehicle’s been fitted with wheel deflectors, low-rolling resistance tires, and an undershield to deflect air away from the car. They've also done things like making the air conditioning system more efficient.

As gas prices continue to climb here in the U.S., Americans will begin to embrace the new diesel technology that is here to stay.

Anonymous wrote on March 28, 2012 - 12:41am Permalink
It's not a bad idea in my area. Diesel is only .20 more than gas where i live.
Chief Mechanic wrote on March 28, 2012 - 1:29am Permalink
I think U.S. readers of this article will need to keep in mind that: - The "86mpg" figure is for the European test cycle, not U.S. EPA. EPA test cycles will probably mean the car does somewhere in the high 40mpgs, combined (city + highway). - Diesel cars on average cost about $2000 more than gasoline cars in the same model line (say a Diesel Focus vs. a Gasoline Focus), so financially it won't be much cheaper than a comparable hybrid like a Prius C. - The U.K. test data says the Econetic has a 0-60 time of 10.6 seconds. That's about the same as a second-generation Toyota Prius BTW, so don't expect the Econetic to be a "hot hatch" either.