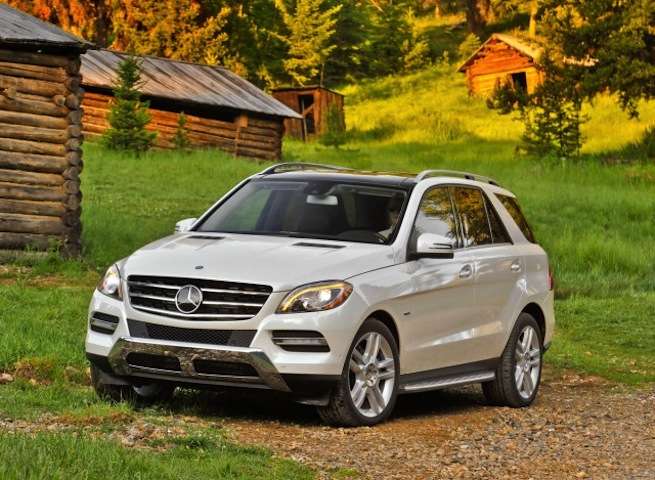 The Mercedes-Benz M-Class is the top selling SUV in the U.S. for the German automaker, and it has just picked up another important safety award. Mercedes has just announced that the M-Class luxury SUV has succeeded in passing what is now the stricter crash test carried out by the American Insurance Institute for Highway Safety (IIHS). It has picked up the "Top Safety Pick+" (TSP+) award and scored a “hat trick” in the process.

The premium Mercedes SUV already received five stars in the U.S. NCAP and Euro NCAP tests in 2012. As a result of this latest award, the M-Class has scored a hat trick and received its third top safety rating. M-Class has again achieved the best marks and defended its leading position in three of the world's most important and most demanding safety ratings.

Prof Dr Ing. Rodolfo Schöneburg, Head of Passive Safety and Vehicle Functions at Mercedes-Benz Cars said in the press release today, "We are extremely pleased with this award as only a few vehicles manage to achieve this hat-trick in the international safety ratings. Achieving this result in the world's most important consumer tests is extremely important to us. However, we base our integral safety development on real accident situations on the road, namely Real Life Safety."

The M-Class is produced here in the U.S. in The Tuscaloosa, Alabama plant and is the top-selling Mercedes SUV in North America. Mercedes says overall as part of the M-Class development, they tested no less than 36 completely different load cases under real test conditions. This included comprehensive simulations as part of the digital prototype phase.

A new element of the rating applied by the IIHS is the "small-overlap test". As part of the test, a front impact test is carried out at 64 km/h with a face contact ratio of 25 percent. This is designed to simulate a front impact in which the driver tries to swerve to the side but doesn’t avoid the vehicle coming in the opposite direction.

Model year 2014 vehicles must pass this test in order to receive the "Top Safety Pick" award. The new 2014 Mercedes-Benz M-Class is now a top performer in three safety global tests and scores a “hat trick” for the Mercedes team of luxury SUVs. Stay tuned to Torque New for all the latest Mercedes-Benz global news.

LG's New EV Battery Plant Is a Welcome News for Tesla
Tesla Giga Berlin's New Hurdle: It's Not Only the Gov't, but Now Tesla Itself
END_OF_DOCUMENT_TOKEN_TO_BE_REPLACED