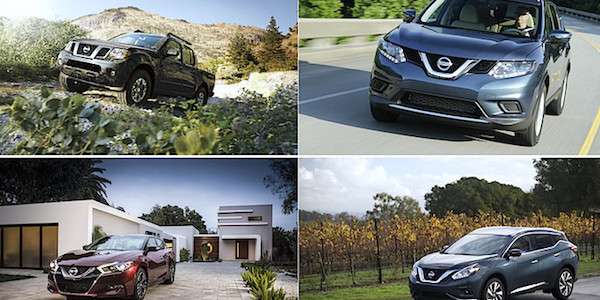 These 4 Nissan Vehicles Deliver on Their Ownership Promise

Owners of the 2016 Nissan Maxima, Murano, Rogue and Frontier seem to be satisfied with their vehicle purchase. That’s what AutoPacific found in their annual survey of over 65,000 owners of new 2015 and 2016 cars and light trucks. These 4 Nissans score big in AutoPacific's 20th annual Vehicle Satisfaction Awards (VSA).

Satisfaction is a better gauge

The VSA awards are based solely on owner input. They measure owner satisfaction with 50 attributes of their vehicle, rather than surveying things gone wrong. George Paterson, president, AutoPacific says, "With most vehicles in the market being pretty well screwed together today, satisfaction is a better measure of how the vehicle is delivering on its ownership promise.”

The Nissan Maxima, Murano and Rogue have all been completely redesigned within the past three model’s years. The 2016 Nissan Frontier pickup is long overdue for a remodel and it’s likely coming soon. All 4 winning Nissan vehicles are up in sales. In calendar year 2016 (through May) Maxima sales are up 146 percent, Murano sales have increased 46 percent and Rogue sales are up 6.7 percent. Sales of the Frontier mid-size pickup have increased 21 percent in 2016.

It was the second win in a row for the redesigned Murano crossover. Murano was also recently voted “10 Best Family Cars” by Parents magazine and Edmunds. The four wins also tied Nissan as the second most of any manufacturer. Tesla wins the overall highest satisfaction for premium brands and Kia is highest as the most popular brand.

Consumers looking for passenger cars, crossovers and light trucks should check out Nissan. Owners seem to be the most satisfied with 4 of their vehicles. The 2016 Nissan Maxima, Murano, Rogue and Frontier score big in AutoPacific's 20th annual Vehicle Satisfaction Awards. They seem to be delivering on their ownership promise.