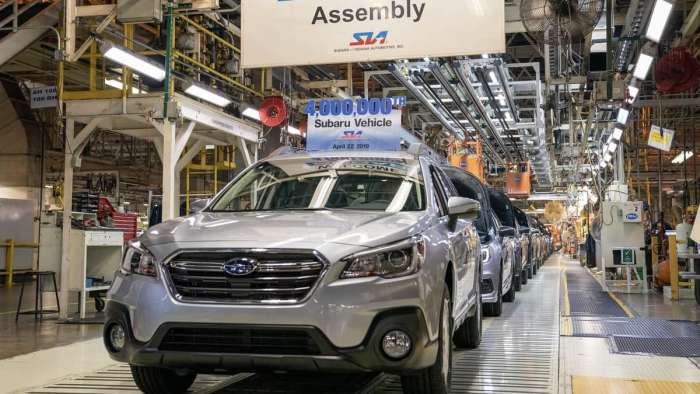 Is The Subaru You Drive Made In America?

Is that Subaru vehicle you drive made in America or is it manufactured in Japan? Subaru has two plants, one in Gunma, Japan and one in Lafayette, Indiana. Subaru’s plant in the U.S., Subaru Indiana Automotive (SIA), hit a big milestone and just produced its 4 millionth Subaru vehicle, an Ice Silver 2019 Outback SUV. The SUV rolled off the assembly line on Monday, April, 22.

SIA currently makes the all-new Ascent family hauler, Impreza sedan and 5-Door compact, Legacy sedan and 2020 Outback SUV models for North America. If you drive a Subaru Crosstrek, Forester, WRX, WRX STI, or BRZ they are made at the plant in Gunma, Japan.

Subaru of America is the Japanese automaker’s largest market by far selling 671,000 vehicles of its total 1.06 million worldwide. Since beginning production in 1989, the U.S. plant has increased its output from 67,000 to approximately 370,000 Subaru vehicles annually. SIA makes about 35 percent of the total number of vehicles the Japanese automaker sells globally.

“This is an incredible milestone for our associates and our company,” said Scott Brand, senior vice president at SIA. “We’ve come a long way since building our first Subaru vehicle more than 30 years ago.” It was a first-generation 1988 Subaru Legacy sedan that was the first Subaru to roll off the assembly line in America.

SIA invested $140.2 million in new machinery and equipment in addition to the $400 million expansion that was finished in 2017. SIA who is owned by parent company Subaru Corporation made the improvements to increase its production capacity by nearly 100,000 units annually to meet the growing demand for Subaru vehicles in North America. Subaru expects to build around 65,000 Ascent 3-Row vehicles in the first year of production.

Next online will be the all-new 2020 Subaru Legacy and next-generation 2020 Subaru Outback that are both expected to begin production at the end of July.

John Goreham wrote on April 25, 2019 - 12:02pm Permalink
I wish the Forester was made in America. I try to buy products made here when I can.
stormwater wrote on April 25, 2019 - 7:26pm Permalink
Thank You. I'm trying to do the same and this is the reason I own the Subaru Outback, Impreza and Honda Civic which are all make in America.
James wrote on June 14, 2021 - 6:41pm Permalink
I try to avoid any US made products. My sti is made in Japan, as it should be. Superior
Mary wrote on April 26, 2019 - 7:10pm Permalink
Yes, wish I had known Foresters made in Japan. I'll research better for my next purchase. Glad many Subarus made here however. Have purchased only Subarus for 25 years. Love these cars! Live where good AWD is necessity.
Michael Spinelli wrote on October 4, 2019 - 12:28pm Permalink
When will suberu produce a truck again had 3 baja and brats best little truck I ever oned
Ron wrote on February 11, 2020 - 10:37am Permalink
The "buy American" is a noble slogan, however with the high price of vehicles these days, I'd rather have better quality control, which is still in Japan.
Bob wrote on May 5, 2020 - 1:20pm Permalink
I will only buy american and not china made at any price.
leonard schnabl wrote on May 8, 2020 - 11:13am Permalink
please itemize what parts are made in china for all vehicles you sell
steve c wrote on June 25, 2020 - 12:42pm Permalink
This Canadian, would prefer made in Japan to made in America, i don't buy into America first sorry!!! Most car parts are coming from China or Mexico cheap cheap labor all European & N/American companies can't compete with. I find it strange that everyone supports America first yet shop at Walmart where most of their products are made in China or some other third world country.......
Don wrote on December 31, 2020 - 9:30am Permalink
Interesting how they only advertize the engine made in USA
Mark wrote on September 26, 2020 - 12:22pm Permalink
• I'm wondering if there are any Covid-caused quality control issues with 2020 Subaru Foresters built in july and august 2020? I don't want my daughter getting one that she's negotiating on if there are known problems such as I'm experiencing with cruddy motherboards for my new dishwasher-according to dealer manufacturer’s rush to fill orders after the covid slowdown resulted in badly degraded QC(quality control and tons of complaints and delays for local customersNews
Yates wrote on January 9, 2021 - 4:38pm Permalink
No matter where it's built...its still rice burner.
Stormwater wrote on January 9, 2021 - 5:14pm Permalink
So you wouldn't mind your junk car built elsewhere but not in America? So pathetic.
Robert wrote on March 7, 2021 - 5:33am Permalink
My imprazea is burning oil (1/2 quart 686mi) and Grayson Knoxville TN. has had it twice and has yet to fix it !
FREDERICK J SANSONE wrote on March 15, 2021 - 8:40am Permalink
Purchased 2021 Crosstrek Premium discovered small defect in the glass. Has anyone out there experienced the same problem?