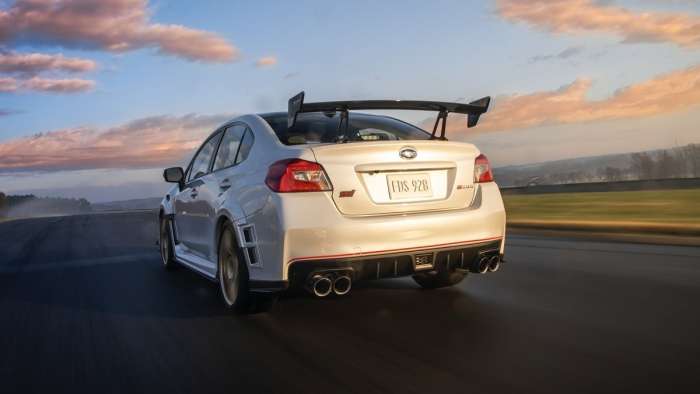 The 2019 Subaru WRX STI vs the STI S209. What are the major differences and how bad do you really want an S209?
Advertisement

Subaru STI fans have been asking for a new S-series WRX STI from Japan since the first S202 launched in 2002. Fans here in the U.S. didn’t even get an STI until 2004 and have never had an S-series STI shipped to U.S. shores until now. So what’s the difference between the standard WRX STI and the all-new 2020 STI S209?

The first big difference is, the most powerful STI ever produced is technically not a Subaru. It’s built for Subaru by Subaru Tecnica International (STI), Subaru’s motorsports partner, and it’s actually an STI-branded model.

The 2019 Subaru WRX STI starts at $36,595 plus destination. The next level up is the WRX STI Series.Gray, which has the same MSRP as the base STI. The STI Limited stands one level above the Series.Gray and starts at $41,395. Subaru has not released pricing on the all-new limited-edition S209 (200 examples will be built), which Subaru calls “the most powerful, best handling, and most exciting” STI vehicle to date, and it will have a considerable cost for all its performance upgrades.

Pricing will likely be much more than the Limited model and could be well over $50,000. And given only 200 will be built for performance fans, expect the possibility of some healthy dealer markups.

You won’t be able to walk into your local Subaru dealer and buy one of these S209 STIs. In Japan, the S-line limited editions are limited in more than just production numbers. Purchasing an "S" model is different because it’s produced for Subaru by Subaru Tecnica International. Previous Subaru "S" models sold in Japan were sold via a lottery to determine who is lucky enough to get one. It will take more than a performance STI enthusiast who has enough money to buy one. You will likely have to get lucky to even be selected to get one of the 200 examples being shipped to U.S. shores.

The 2019 Subaru WRX STI’s turbocharged EJ25 2.5-liter four-cylinder Boxer engine makes 310 horsepower (a 5-horsepower bump from last year) and 290 pound-feet of torque. The 2020 STI S209 takes the standard engine and ramps up the turbocharger’s boost pressure, resulting in an estimated output of 341 horsepower. Torque is said to increase by 10 percent, so around 319 lb-ft.

The S209 is a hardcore track machine developed by STI. It features an upgraded HKS turbocharger, forged pistons, a high-flow fuel pump, larger injectors, and a high-flow exhaust system. It also features an intercooler water sprayer, operated via a button on the steering wheel. Fuel economy for the 2019 Subaru WRX STI is 17/22 city/highway mpg. The STI S209’s gas mileage estimates haven’t been released yet.

It’s really not fair to compare the WRX STI to the S209, because this ultra-exclusive, most powerful STI ever produced is technically not a Subaru. The extensive revisions and upgrades are made at Subaru Tecnica International’s custom shop hidden in Kiryu, Japan, and then shipped to U.S. dealers. The run of 200 is required for homologation (the practice of building enough to be considered a production car).

The 2020 Subaru STI S209 won’t be easy to come by as only 200 lucky performance fans will ever get their hands on one. Many will be snatched up by collectors and kept as an investment. So it all depends on how bad you want one and how much you are willing to pay.

LG's New EV Battery Plant Is a Welcome News for Tesla
Tesla Giga Berlin's New Hurdle: It's Not Only the Gov't, but Now Tesla Itself
END_OF_DOCUMENT_TOKEN_TO_BE_REPLACED