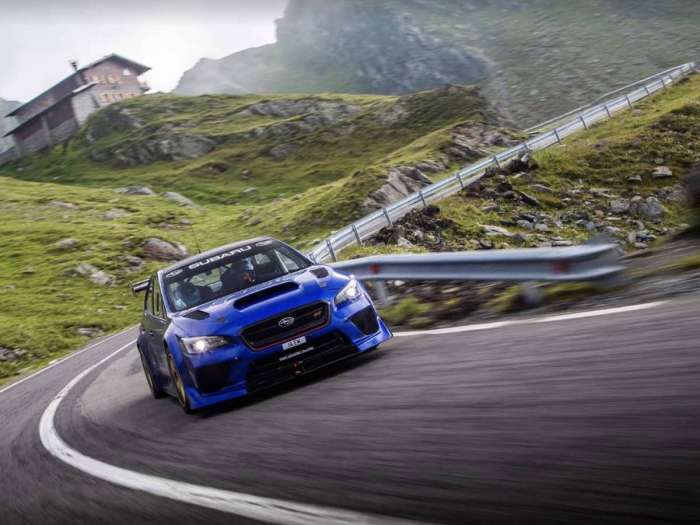 Subaru is at it again with the WRX STI Type RA Time Attack machine. See where they took it to set another new world’s record.
Advertisement

Subaru of America, Provide, and Mark Higgins took the WRX STI Type RA Time Attack car and set another new world’s record. If you remember, Subaru has taken the car out four times since it was built by Prodrive. The first record was set at the Isle of Man TT Mountain Course in 2016 when they set a record lap for a car with an average speed of 128.73 mph.

In 2017, they set the Nurburgring record with New Zealand driver Richie Stanaway setting a four-door sedan record of 6:57.5. Then last year, the WRX STI Type RA went up the hill at the Goodwood Hill Climb with Higgins back in the driver's seat, where it finished third.

Now Subaru took the special high-performance STI to Romania's National Road 7C, known as the Transfagarașan, to attempt another word’s record. This unique winding road is dotted with steep hairpin turns, long S-curves, and sharp descents through South Central Romania and has captivated the imagination of performance enthusiasts the world over. A normal car can only drive the high mountain road at an average speed of 25 mph. According to a story by MSN Autos, Subaru of America thought it was time “for someone to lay down a record time.”

With veteran Subaru driver Mark Higgins behind the wheel of the Subaru WRX STI Type RA and co-driver Darren Garrod in the passenger seat, they called the record-making attempt, Time Attack Romania. Subaru and Prodrive made a few modifications to the STI from previous record attempts by adding working headlights, a barometric sensor, and a larger, 100-liter fuel tank.

The weather didn’t cooperate as the team set out on the 52.4-mile Romanian road with 624 tight curves and elevation changes ranging from 1,607 to 6,699 feet to navigate. They also had to deal with rain and fog and try to figure out which tires were best. On one attempt, the WRX STI’s 600 horsepower and 447 lb-ft of torque 2.0-liter Boxer engine destroyed the rain-specific tires with the road going from wet to dry.

With weather playing a factor, the fog and rain finally cleared from the high mountain road and Subaru, Prodrive and Higgins were ready for one last attempt. The Subaru WRX STI Type RA Time Attack machine performed like it was supposed to and set a record run in 40 minutes, 58.8 seconds. Average speed was an amazing 76.69 mph. The helicopter Subaru brought along captured parts of the 52.4-mile run, so look for a video to be released soon. Stay tuned.

SubaStar wrote on July 20, 2018 - 8:21am Permalink
I'm so surprised that it's Subaru of America (SoA) - Prodrive who organise so many records attempts in Europe : Isle of Man, Nürburgring, Goodwood and now Romania : what's SoA's matter of interest doing this? Why not doing more in Pikes Peak or any other place in North America? Please help me to understand their strategy...
Denis Flierl wrote on July 20, 2018 - 3:27pm Permalink
Good question SubaStar. Prodrive is located in the UK and that's probably why. I would also like to see Subaru do more record attempts in the US! Thanks for reading!