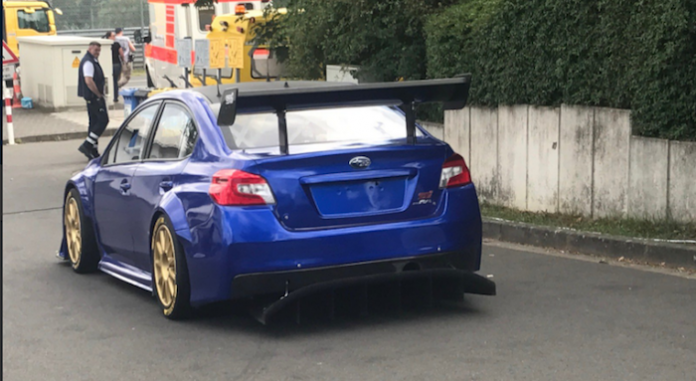 The 2018 Subaru WRX STI Type RA NBR has set a Nurburgring record. It’s the fastest-ever sedan on the 'Ring'.
Advertisement

Subaru has done it again with the Subaru WRX STI They just recorded the fastest-ever lap for a sedan at the Nurburgring today in Germany. This was the Prodrive-built STI Type RA specifically designed for this record attempt. When Subaru and Provide hook up, good things happen.

Dominick Infante, Product Communications manager for Subaru of America commented: "We brought the WRX STI Type RA NBR Special here to set a record and call attention to the WRX STI Type RA that we will launch later this year. The WRX STI Type RA promises a great deal, with improved performance and styling and even better handling dynamics than the current car."

The Prodrive-built STI Type RA is nothing like the production car. It runs a modified EJ20 2.0-liter WRC-spec boxer powerplant. It uses a 75-mm intake, the turbo runs at 250 psi of boost and pumps out more than 600 horsepower at 8,500 rpm. The STI Type RA NBR Special is a unique race machine, with the interior gutted, a full roll cage, special Dunlop racing tires, race suspension, engine mods, body kit, adjustable rear wing and a carbon fiber roof.

Prodrive calculated the top speed at the ’Ring’ today to be 179 mph at 8,500 rpm in top gear. The STI used 9-inch-wide slick tires all around to keep it stable on the track at those high speeds. The specially-built 6-speed semi-automatic sequential transmission, modified with hydraulics for paddle-shift operation, shifts at a lighting speed of 20 to 25 milliseconds.

Prodrive and Subaru set another record run, now with the 2018 Subaru WRX STI Type RA NBR. The performance machine conquered the 12.8-mile (20.6-kilometer) lap around the Nurburgring Nordschleife in less than seven minutes. Next, Subaru will launch a 2018 WRX STI Type RA production model limited to just 500 examples. The performance car will be released early next year. A video of the record run will be released soon. Stay tuned.

William Burggraf wrote on July 23, 2017 - 3:15am Permalink
I would love to see how this car go
Denis Flierl wrote on July 23, 2017 - 8:36am Permalink
The production car is coming in the first quarter of 2018 to the US. Thanks for reading William!
SubaStar wrote on July 23, 2017 - 12:49pm Permalink
This is not a record because this Subaru car is competing with... no one else in any category. This car is hugely prepared by Prodrive (600 hp) and is far from the Type RA (308 hp) coming next in the US. It has done other great performances at TT (Tourist Trophy) at Isle of Man or at Goodwwod hill climb and now on the Nürburgring Nordschleife. Nice performance for a nice race car, but no way to say it's a record...
Denis Flierl wrote on July 23, 2017 - 7:44pm Permalink
You are exactly right. This is a specially-built STI just for this Nurburgring run. It's a different engine (EJ20), transmission, suspension, and aero body kit than the Type RA production car (310hp estimated). Thanks for reading!