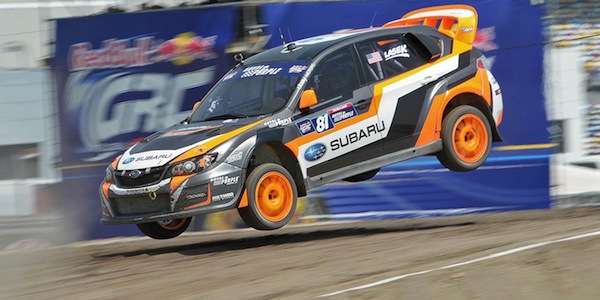 The Subaru Rallycross team needed the WRX STI to perform flawlessly and it did. What was going on that could have destroyed the car?
Advertisement

It takes a team effort to stand on the podium, and the Subaru WRX STI Rallycross team pulled off a great finish at Red Bull Global Rallycross Daytona. Bucky Lasek piloted the WRX STI to a 3rd place finish but it wasn’t easy for the SRT USA engineers and technicians. They were trying to dial in the right setup on the car in the extreme conditions. There were two factors that made it difficult for SRT USA, but they overcame them to stand on the podium.

As the WRX STI arrived at Daytona International Speedway, the team knew it needed to dial in the right setup. SRT USA had to make the right adjustments in the WRX STI GRC car in order for the 600hp race car to handle the challenging course at the Daytona track. It features a tricky course that’s over a mile in length that features high-speed straights combined with multiple hairpins. It created a challenge for SRT USA engineers and technicians to dial in the right setup on both STI GRC cars. SRT says, “it made for a challenging setup as it’s hard to optimize for both simultaneously.”

On Friday, as the Global Rallycross testing got underway, outside temperatures inched towards triple digits. In the cockpit and under the hood, temperatures soared to extreme levels for the drivers and the car. SRT USA techs has to deal with the extreme heat and needed to makes adjustments so the cars would make it through the grueling weekend of racing. Extreme heat is one of the hardest things on the race cars and drivers.

SRT USA must have had the right setup because both cars performed flawlessly. In the second round, both Subaru WRX STI’s were up to full speed. Both Sverre Isacshen and Bucky Lasek secured 2nd place in their respective heat races. The strong results gave SRT USA good positions in the semi-finals. Isachsen and Lasek were both on the front line in separate heats.

Sverre Isachsen had an issue during the semi-final landing him in the last chance qualifier (LCQ). He advanced, but ended up on the last row in the final. Bucky Lasek was on a roll and finished the semi-final with an error-free round and secured 2nd place. This earned him a spot on the inside of the front row during the final which is an advantageous slot. As the cars launched off the line, Lasek fell to fourth place.

Subaru gets a podium finish

The driving was chaotic as it always is in the GRC action packed final. Lasek was able to navigate the WRX STI smartly through the intense competition and moved in to third place. SRT USA said interior car temperatures were “well over 100 degrees.” Running in 3rd for the bulk of the final, Lasek ran a solid race and ended up with a 3rd place finish behind Ken Block 2nd place and Rhys Millen in first place. The Viking Warrior fought a hard battle and advanced though the field to secure a 5th place finish.

The whole SRT USA team put in an incredible effort dealing with the challenging course at Daytona and with the extreme temperatures. It takes a team effort to pull off a podium finish in the super competitive GRC racing. The 2014 Subaru WRX STI performed flawlessly and Lasek screamed to a 3rd place finish at Red Bull Global Rallycross Daytona this weekend. Next up is GRC in Los Angeles, California September 20-21.