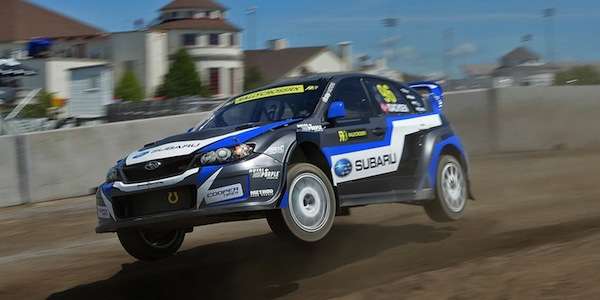 The 2014 Subaru WRX STI GRC cars come with 3 materials that enable them to go faster. What unique materials do they use?
Advertisement

The 2014 Subaru WRX STI Global Rallycross cars need to be super-lightweight in order to compete in the competitive sport. The cars also need to have body parts that can be changed quickly because of the damage they incur during the battles that take place on the track. This is where Vermont SportsCar, who manages all the race activities for Subaru SRT USA, plays a huge role. They make all the parts for the Subaru WRX STI and transform the productions cars into race cars.

Many parts are hand made

The Vermont SportsCar shop hand makes all the parts for the WRX STI GRC and Rally cars. It can take hours to fabricate the body panels, mirrors, wing, trunk lid and the front and rear bumpers. These parts are all made of different materials according to how much impact during the race they receive. The mirrors, wing, and trunk lid are made entirely out of carbon fiber which is remarkably strong and light, but lacks the ability to deform when impacted.

But the rear door skins on a Rallycross car get impacted many times during a race and are made of a special carbon fiber and kevlar blend. This material is more flexible and can better withstand the impacts from other cars. Vermont SportsCar also uses a special proprietary composite when optimum durability is required, such as in the front bumper.

Parts need to be changed quickly

During the Global Rallycross race events, many body parts are damaged and need to be replaced quickly during the short periods between the races. The team back in Vermont makes extra body panels and other WRX STI parts so the techs at the race have an inventory at their disposal. During the short service intervals at GRC events, the SRT USA technicians need to remove or replace these damaged parts as quickly as possible.

Many hours go into making just one part

The composite shop at Vermont SportsCar creates custom molds for each part, and it can take many hours just to make one of these parts. A rear bumper for example takes seven hours to complete. The composite team works with the engineers and technicians to constantly refine the parts already in use. They need to ensure that each part is “technician friendly” and can be changed quickly at the race track.

The Subaru WRX STI Global Rallycross cars are lightweight and powerful. These car are pumping out 600 horsepower and competing in an extremely hostile environment within inches of the other cars. They are continually being hit and damaged during the race as they do battle in the corners. Hours of fabrication time in the shop keeps these cars looking good and competing on race day.