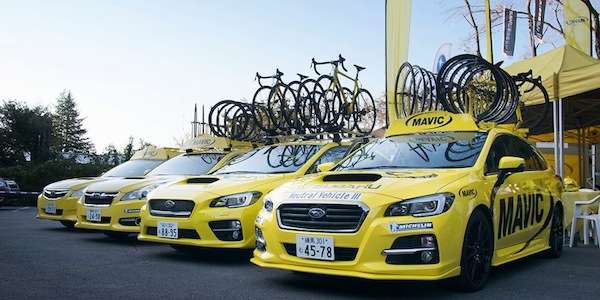 Subaru brings the 2015 WRX S4 to the largest cycling event in Asia. How does the performance car exceed the anaerobic intensity of a cyclist?
Advertisement

The new 2015 Subaru WRX S4 performance sedan will see some remarkable anaerobic intensity in the largest cycling event in Asia. Subaru is an event sponsor for the Japan Cup Cycle Road Race that was held last weekend in Japan. It continues this week and Subaru has a large presence at the event by bringing 50 service vehicles to the largest cycling event is Asia. The new 2015 WRX S4 is provided by Subaru as one of the service vehicles that helps with numerous things during the race. Many of the cycling teams also chose to use Subaru vehicles as their support vehicle during the race and 2015 WRX S4 sporting a bright yellow paint job is being seen all over Japan.

The 2015 Subaru WRX S4 can achieve anaerobic intensity in a motorsport event, much like the cyclists will experience in this cycling event. Anaerobic is an extreme amount of intense exercise that the human body can only keep up in short bursts. Cyclists know it’s an exercise level above the intensity at which the body’s need for oxygen can be met. This intensity can be sustained only briefly. A machine like the 2015 WRX S4 can sustain extreme amounts of performance for long periods over the course of a motorsports event.

124,000 cycling fans will see the Subaru vehicles as they wind through the cities and countryside of Japan following the cyclists as they achieve this anaerobic intensity. Subaru provides three other support vehicles besides the WRX S4; 2014 XV Crosstrek, Forester SUV and the new 2014 Levorg sports tourer. But the bright yellow 2015 WRX S4 has been the big hit with the riders as they get the support they need.

The high-performance 2015 Subaru WRX S4 is the ideal vehicle for traveling without delay to the riders and helping with things like loading equipment and the many spare bikes and wheels needed for mechanical trouble shooting during the long race. Subaru has been using competition vehicle team cars in Japan for 20 years, but this is the first time the WRX performance car has been used.

FIND OUT WHY: New 2015 Subaru XV STI launches in Asia but won’t be coming to the U.S.

WRX S4 gets tested on the race course

The drivers of the new 2015 WRX S4 are putting it to the test as they follow the riders who are traveling at speeds of 80km/h on the downhill portions of the race course. There are many elevation changes throughout the course which is held in the Forest Park circuit course in Utsunomiya near Gekiso. It includes a grueling mountain stage of 151.3km and also runs through major urban centers.

2015 Subaru WRX S4 gets the new 2.0-liter engine that powers the new performance model. S4 is equipped with a new high performance 2.0-liter direct injection turbo "DIT" boxer engine. The new engine was perfected in Subaru’s motorsport involvement and produces 221 kW (296 hp) and 400 Nm (295 lb ft of torque). That’s a significant jump from the other global models. Subaru has been perfecting the new 2.0-liter powerplant in the 2015 WRX STI Nurburgring 24-hour race car this year. The testing was done by the Subaru Tecnica International's (STI) race team. Subaru says it will achieve 31 mpg in the JC08 mode Japanese cycle test.

The largest cycling event in Asia, the Japan Cup Cycle Road Race started last weekend in Japan. As an event sponsor, Subaru provided 50 service vehicles to MAVIC, and was also chosen by numerous teams as their support vehicle. The performance 2015 Subaru WRX S4 has been a big hit with the drivers, cyclists and spectators. There will be more spirited anaerobic cycle riding and spirited driving of the new 2015 WRX S4 as they continue the race this week!