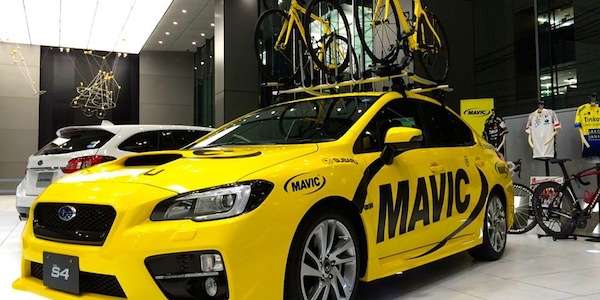 Subaru is a special sponsor for the Japan Cup Cycle Road Race and the 2015 WRX S4 will be involved. What's up with the bright yellow WRX S4?
Advertisement

Yellow may not be your favorite color, but you won’t be able to miss the 2015 Subaru WRX S4 performance car. The special yellow MAVIC Subaru WRX S4 along with three other Subaru vehicles are supporting the Japan Cup Cycle Road Race 2014. The performance car will be used as a support vehicle for the riders as they navigate the race course. 124,000 fans will gather to watch the bicycle race that will wind through Japan.

Subaru is providing four of these support vehicles for race management and about fifty cars will be involved in the race. Fans won’t be able to miss the bright yellow Subarus as they navigate the course following the riders. Subaru should get lots of exposure for their newest performance WRX S4 that was introduced in August for the Japan market. But do they really need more exposure for the 2015 WRX S4 and WRX STI?

The high-performance Subaru WRX S4 will be the ideal vehicle for traveling without delay to the riders and helping with things like loading the equipment and the many spare bikes and wheels needed for mechanical trouble shooting during the race. The other Subaru vehicles used for support will be the 2014 XV Crosstrek, Forester SUV and the new 2014 Levorg sports tourer. But the bright yellow 2015 WRX S4 will be a big hit with the riders.

It’s only been one month since the new WRX S4 and 2015 WRX STI was introduced in Japan, and they have blown away sales targets by a huge margin. The new-generation WRX S4 and WRX STI performance cars announced on August 25, 2014 through September 24, 2014 have exceeded sales goals by six times the amount they projected. Subaru originally projected they would sell 650 units, but orders for the new performance sedans have been pouring in and six times that amount with 3,835 units have been ordered in the first 30 days. WRX S4 is selling slightly better than than WRX STI with 1,992 units for S4 and 1,843 units for STI.

Subaru has been using competition vehicle team cars in Japan for 20 years, but this is the first time for the WRX performance car. The support vehicle drivers will be able to put the new 2015 WRX S4 to the test as they follow the riders who will travel at speeds of 80km/h on the downhill portions of the race course. There are many elevation changes throughout the course which will be held in the Forest Park circuit course in Utsunomiya near Gekiso. It includes a grueling mountain stage of 151.3km and also runs through major urban centers.

Subaru is a special sponsor for the Japan Cup Cycle Road Race 2014 and WRX S4 along with three other Subaru vehicles get a new yellow paint job so they can be seen. The high-performance 2015 Subaru WRX S4 will be put to the test as it navigates the mountain and city courses to keep up with, and more importantly, stay out of the path of the bicycle riders. The fans won’t be able to miss the special bright yellow MAVIC 2015 Subaru WRX S4 on the race course for the Japan Cup Cycle Road Race which runs October 11-18. Subaru is having trouble keeping up with 2015 WRX S4 orders, and now the popular S4 and WRX STI will be getting more exposure.