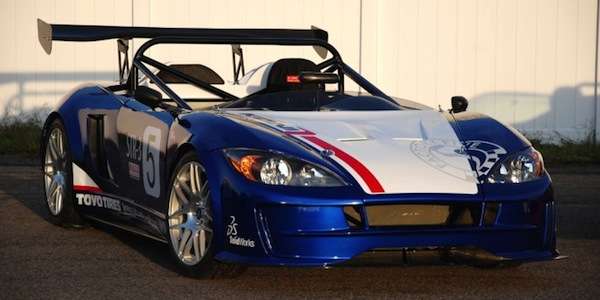 This Subaru WRX 818 R is the ultimate track weapon

The new Subaru WRX 818 R was launched in June 2013 and is the ultimate Subaru WRX track weapon.
Advertisement

If you own an older Subaru WRX, 2002-2007 model, and you have aspirations to go to the track, Factory Five's 818 is the ultimate Subaru WRX track weapon for race fans. We told you about Factory Five's 818 kit for the Subaru WRX and this R model lets Subaru WRX fans turn their older model into a real track weapon that will destroy the competition. There are lots of 2002-2007 WRX around and many are being driven as daily drivers. This gives track fans a way turn that daily driver into a weekend weapon.

The Factory Five's 818 R kit is the race track model. You can use your OEM 2002-2007 Subaru WRX drivetrain and Factory Five provides the rest. Of course you have to do the work in your garage. But you can take your older WRX and have some real fun on the weekend.

Factory Five Racing provides the chassis, frame, suspension, and body, and you provide the 2002-2007 Subaru WRX or normally aspirated Impreza donor car. If you have a Subaru WRX, you have whatever you need to build the 818 in your own garage. The 818 kit uses composite body panels that are gel coated and don’t have any body seams so there is absolutely no panting required.

How much does it cost? It comes in two variants, the 818 S Speed model and the 818 R which is the track version and race model. The kit for the Subaru WRX 818 is $9,900 and Factory Five says it can be finished for $15K. That’s not a bad deal to take an older WRX and turn it into something that will light up the track.

Many Subaru WRX performance fans already take their performance cars to the track on the weekend. Many have modified their engines to produce power in the 350-400 hp range. They already have a great track engine, and now they can have a race track suspension that will make the WRX a real competitor.

Factory Five says that it will take you about 250 hours to strip your WRX donor car down and then transfer those parts to the new 818 R sports car kit. It could take 8-10 months of work on nights and weekends in your garage. And then you are ready to take on the competition at the track.

Are you ready to trade in your 2002-2007 Subaru WRX for a newer model? Maybe you are thinking of getting a new 2015 Subaru WRX. You might want to think about using your WRX you have and turn it into the ultimate Subaru WRX track weapon.

Other Subaru WRX 818 stories of interest.
How to transform your Subaru WRX into a sports car for under $15K