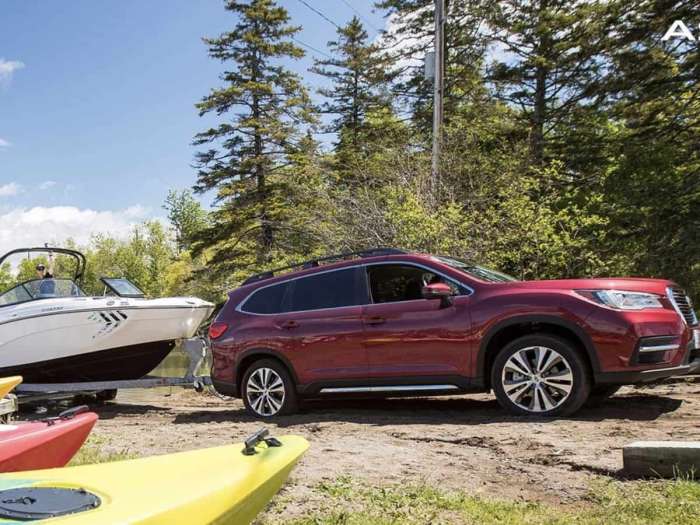 Subaru had big problems with the Tribeca SUV and they fixed it. They axed the vehicle and started over. Tribeca had cramped third-row seating, limited cargo capacity, it had an aging design, poor fuel mileage, and it could only tow up to 2000 lbs. The Japanese automaker couldn’t compete in the competitive 3-Row segment with the Hyundai Santa Fe, Kia Sorento, Nissan Pathfinder, Mitsubishi Outlander, Toyota Highlander, and Honda Pilot. Tribeca’s five problems have been addressed with the all-new 2019 Ascent 3-Row family hauler.

Edmunds just released their 10 notable new cars list for 2019, and they say the new Subaru Ascent is an excellent choice for families. It checks all the right boxes that the discontinued Tribeca did not. Ascent comes with seating for up to eight, a bigger cargo space, it comes with 8.7 inches of ground clearance, and standard all-wheel-drive giving the 3-Row vehicle the same “go-anywhere” off-road capabilities as the Outback, Forester, and Crosstrek stablemates.

The discontinued Tribeca SUV was powered by a 3.6-liter 6 cylinder boxer engine that was aging, and got an EPA-estimated 16/21 city/highway mpg and 18 combined mpg. The new Ascent gets the brand’s new FA24 Boxer powerplant with the latest direct injection and other internal upgrades for the best power and towing vs fuel efficiency.

Subaru addressed fuel mileage with their new 3-Row Ascent. The Ascent 2.4-liter twin turbo four cylinder is their new-generation boxer engine developed specifically for this vehicle that’s built at Subaru’s U.S. factory in Lafayette, Indiana. It gets an EPA estimated 21/27 city/highway mpg and 23 combined mpg. The new 2.4-liter boxer engine offers drivability, power and fuel economy equal to or better than that of the competition’s 6-cylinder engines.

Subaru addressed five problems they had with the aging Tribeca. The 2019 Subaru Ascent checks five boxes that the discontinued Tribeca did not.