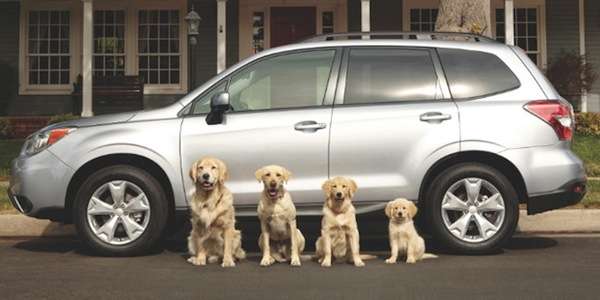 The winner of the Super Bowl ad was the Budweiser “Puppy Love” commercial that won on USA TODAY's Ad Meter. Is the 2014 Subaru Forester ad better?
Advertisement

The Super Bowl ads are always a big draw during the big game and especially big yesterday as there wasn’t much to keep fans attention. As the Broncos got blown out by the Seahawks, in the final two minutes, the winning Budweiser ad was shown. This was the ad that got everyones attention and the “Puppy Love” Budweiser commercial won the Ad Meter voted on by viewers.

Anheuser-Busch has earned one the most coveted of U.S. advertising honors, winning USA TODAY's consumer-judged Ad Meter for Super Bowl commercials. The “Puppy Love” Budweiser commercial wins almost as big as the Seahawks victory over the Broncos. Budweiser’s precious puppy ad grips at the hearts of viewers and wins going away.

It seems like these puppy and dog commercials are drawing much attention. At our Super Bowl party, we had a little competition of our own with the TV spots from yesterday. But we added in one that wasn’t shown yesterday to see how it would rate if it was shown during the Super Bowl. The ad came from Subaru and also features some lovable dogs.

Our Super Bowl party fans watched both ads, and it was a 50/50 spilt between the two ads you can see below. Which ad would you chose as number one between the two? Before you watch the ads, we’ll introduce the dogs in the Subaru “Dog tested. Dog approved” spot.

Auggie is the dad driving the new Forester and is a 5-year-old purebred golden retriever from Canada. He rose to prominence starring in Hollywood movies and television shows and has many television commercials to his credit. He lives at home on a farm with his 10 brothers and sisters. He is a big lovable teddy bear who loves to cuddle and always has a stuffed animal in his mouth.

Stevie plays his wife and is a 4-year-old purebred yellow Labrador retriever who was rescued from an animal shelter in Pasadena, California. She started training six months ago for this spot, and playing "Mom" for Subaru is her first big break. She lives on the farm with Auggie and 10 other dogs. She loves her dog bed and can be found curled up on it at any given time. Her favorite thing in the world is her tennis ball.

Sadie plays the daughter and is a purebred golden retriever from Moorpark, California, who was just adopted by a loving family. She is a growing pup at about six months old, and these are her first big TV commercials. Her new family was thrilled to let her be a star and receive some top-notch coaching and socialization from professional trainers. She was a favorite on the set and loved to give kisses to everyone.

Sebastian is the “baby” in the car seat and is a 12-week-old golden retriever from the same breeder as Sadie in Moorpark, California. He's super smart and has already learned many tricks and behaviors well beyond his years. He loved working on these commercials and riding in his car seat for the shoot.

These two spots tug at our hearts as they use these lovable dogs and puppies to sell their product. Subaru seems to be on the right track and knows what Anheuser-Busch has already figured out on how to draw customers with their ads.

Watch the two commercials below and tell us which one you would vote for as your favorite.