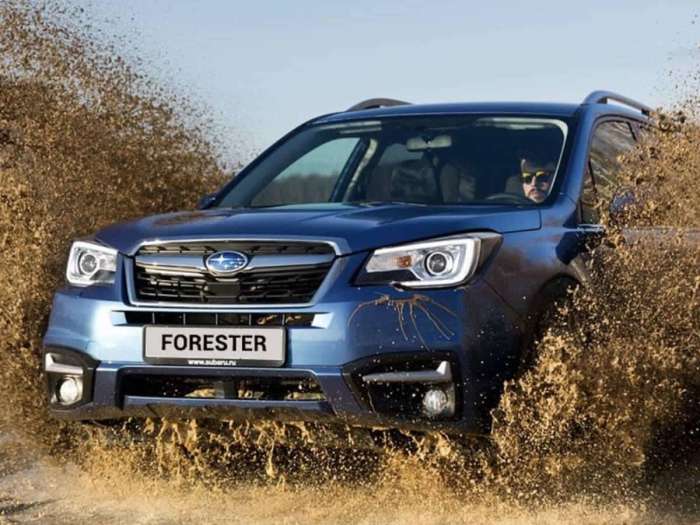 Subaru Forester Is One Of 5 Hottest Models In U.S.; What’s The Attraction?

The all-new 2019 Subaru Forester is one of the top-five hottest-selling vehicles in America. What is the attraction to the new small SUV?
Advertisement

Subaru may be the hottest automaker in the U.S., with 83 consecutive months of year-over-year sales growth and they’ve hit three homes runs. They have the wildly popular Crosstrek small SUV that’s been setting new records all year, families have purchased 22,588 all-new Ascent family haulers since June, and the all-new 2019 Forester is off to a fast start in its first month.

According to USA Today, the Forester is one of the hottest selling new vehicles in America. The brand's newly-redesigned Forester SUV delivered a 19 percent increase to 15,981 units sold in October. Sales of the new fifth-generation model and the outgoing version combined to make it the brand's best-seller in October, surpassing the top-selling Outback SUV/Crossover.

What’s the attraction to Subaru Forester

Subaru has created a brand image that’s about building vehicles with a “go-anywhere“ attitude, developed for people with active lifestyles, and comes standard with Subaru’s Symmetrical all-wheel-drive with all-terrain capability. Add in the Boxer engine that sits low in chassis, and you have a small SUV with superior driving dynamics.

Most automakers don’t worry about it, but excellent outward visibility is one of the core values for the brand and the Japanese automaker wasn’t willing to sacrifice it for a new raked roof design limiting driver visibility. Forester comes with a large, bright, and open greenhouse interior.

Subaru also has a goal to be the overall automobile safety leader, and Forester is their flagship model for their new technology around the globe. Subaru spent more money on new safety technology on Forester and it comes standard with EyeSight and a new DriverFocus with facial recognition, standard on top-of-the-line Forester Touring trims.

Subaru gets criticized for having boring designs, but vehicles like the all-new 2019 Forester SUV shows consumers want safety, all-weather, all-terrain performance, and utility over flashy new styling. It’s a formal that is working for the brand’s new flagship model.

Saul Rodriguez wrote on November 11, 2018 - 10:30am Permalink
I've a 2000 Forester with 272k miles on it and another 2011 Forester. These vehicles endure are so strong and endure harsh environment like potholes and really bad roads, year after year. I would buy another one but the distributor in Puerto Rico has hijacked the prices like these are luxury vehicles.
Ed B wrote on November 12, 2018 - 9:03pm Permalink
Well, it certainly isn't speed...
Ed B wrote on November 16, 2018 - 10:17am Permalink
News flash - Mazda for 2019 is stepping in to fill the void of the Forester XT. Mazda will offer a 4 cyl. turbo w/torque vectoring. 227HP with regular gas and 250HP performance on hi-octane gas. Wake up Subaru you have a good thing going. You've left an opening for your competition.
Joe Hohmann wrote on November 20, 2018 - 1:13pm Permalink
I love "comes standard with the top-of-the-line model".

LG's New EV Battery Plant Is a Welcome News for Tesla
Tesla Giga Berlin's New Hurdle: It's Not Only the Gov't, but Now Tesla Itself
END_OF_DOCUMENT_TOKEN_TO_BE_REPLACED