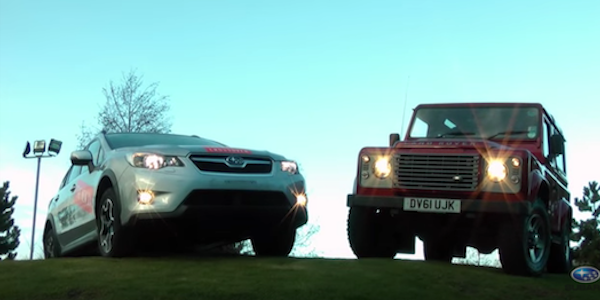 The 2016 Subaru Crosstrek competed with the Land Rover Defender across a series of difficult obstacles. Who wins?
Advertisement

Can Crosstrek keep up with Defender?

Enthusiasts know the Defender will handle the most extreme terrain on the planet and they get used for this purpose. 99 percent of all SUVs stay in an urban environment and never get taken off-road by their owners. Subaru touts their all-wheel drive vehicles they say will handle just about anything. This course is a good way to see if their “claim to performance” is true or exaggerated. Are their claims accurate?

Both take on the test course

While the Defender didn’t have a problem getting up the steep stairs, the wheels slipped at the top and the iconic model lost traction. The Crosstrek takes on the same incline and diverts power away from the wheels with the least grip to those with the most and it pulls right up without losing its grip.

Subaru’s Symmetrical AWD comes on all Subaru models except for the rear drive BRZ. All Crosstrek models equipped with the Lineartronic continuously variable transmission (CVT) use an electronically managed continuously variable transfer clutch. It actively manages torque distribution in response to driving conditions, acceleration, deceleration and cornering. Slippage at the front or rear wheels causes torque to transfer (up to 100 percent) to the opposite set of wheels.

The 2016 Subaru Crosstrek also comes with 8.7 inches of ground clearance that gives it the ability to go over rough terrain without scraping bottom. The boxer engine sits low in the chassis and gives Crosstrek a lower center of gravity giving it the ability to handle the steep 1:3 ratio “axle twisting” gully without tipping over. The Crosstrek cocks its wheels, transfers power to the opposite wheel and tackles the terrain.

The current Defender is going away and the next-generation Defender won’t make its debut until 2018. You can get an early model Defender and still get parts through Land Rover’s Heritage Restoration program. Most consumers wanting a tough off-roader won’t think of the 2016 Subaru Crosstrek as being an alternative vehicle. The crossover will go just about anywhere its owner wants to go. Subaru’s AWD claims are not exaggerated. For now, Subaru wins because you can still get one.

don wrote on January 31, 2016 - 1:21am Permalink
Only someone with zero off-road experience would think that the Subaru can come close to the Defender in off-road ability. This test track is pretty contrived. Chuck them both through some mud, or a steep climb that requires axle articulation, or some soft sand and watch the Subaru fail. It's clearly aimed at people who think that "off-road" is when you mount a curb and park on the grass.
Don Bledsoe wrote on June 5, 2016 - 6:22pm Permalink
I have a 2016 crosstrek i dont know if it would out perform in a different test all i can tell u is i had mine on a 26 degree climb and descent and it didnt balk and 1 foot of mud and it went through as i passed a wrangler stuck....if i had a wench would have helped...not an option lol. Have had it in sugar sand that u couldnt walk through again not a problem. I think if i was traversing big rocks yes defender all the way.

Tesla Contemplates A New Strategy for China Retail even As Sales Boom
Jay Leno on Elon Musk & EVs: “I Think He Should Get ... Credit"
END_OF_DOCUMENT_TOKEN_TO_BE_REPLACED