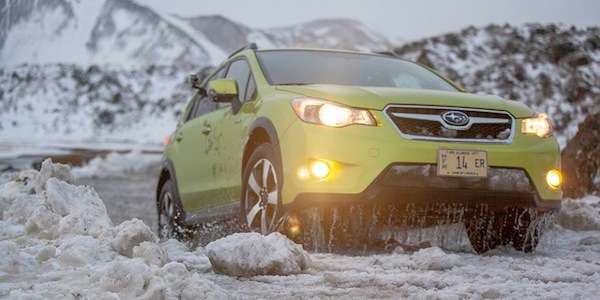 Will adventure seekers buy the 2014 Subaru XV Crosstrek Hybrid for its fuel-mileage or for its off-road capabilities?
Advertisement

Why take Subaru’s first hybrid, the 2014 XV Crosstrek to Iceland? Driving Sports says it was not to test the new hybrid’s fuel mileage, but it’s about the adventure. They take the XV Crosstrek Hybrid off-road up the slopes of a volcano to show the capability that the crossover has. That’s what the Subaru brand is about, building multi-purpose vehicles that will handle the worst conditions on the planet and return safely.

Many adventure enthusiasts will use their SUV for off-road adventures and use them in extreme conditions like those found in Iceland. Flat-landers may not understand what this video is about, but those who live in mountainous regions around the globe will get it. They will encounter condition like these when they venture out into the high country. And it doesn’t just have to be winter when these conditions happen.

When most automakers come out with a new green hybrid vehicle, they tout the fuel-sipping benefits and talk about how fuel-efficient and how green the car will be. But Subaru isn’t your average automaker. They launched their first-ever hybrid mode, the 2014 Subaru XV Crosstrek Hybrid, and they took it to the coldest and most harsh place on the planet to test its toughness in extreme conditions.

Last November, just as winter was starting to settle into the Icelandic Highlands, Subaru thought it would be a brilliant idea to drive the Crosstrek Hybrid across a volcanic plain. It was a great idea, but most of the drivers weren’t prepared for the extreme conditions. The Subaru XV Crosstrek Hybrid was ready though.

Why will adventure seekers buy a vehicle like the 2014 Subaru XV crosstrek Hybrid? Will they buy the new crossover for the 31 mpg combined fuel mileage, or for its off-road abilities? There are many SUV hybrids on the market, but Subaru is attracting younger adventure seekers who will use their vehicle for off-road adventures where they will actually use the Crosstrek’s Symmetrical All-Wheel Drive, chassis capability and 8.7 inches of ground clearance.

The 2014 Subaru XV Crosstrek Hybrid features a Subaru-designed hybrid system that gets 31 mpg combined and powers all four wheels. Price starts at $21,995. Stay tuned to Torque News as we get our hands on the new hybrid for a full test drive review coming next week. Are you looking for an adventure?