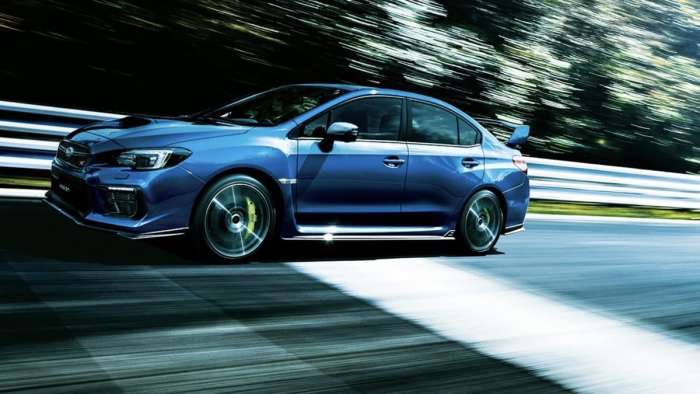 New details have been released on the 2020 Subaru WRX and WRX STI. Here what’s coming.
Advertisement

The 2020 Subaru WRW and WRX STI are coming later this year but it won’t get many changes. Subaru Japan just released new information on the performance sedans and they only get minor exterior design upgrades. Subaru Corp won’t be releasing the next-generation WRX/STI until the 2021 model year, and performance fans will have to wait another year before details on the all-new fifth-generation models are announced. Here’s what’s coming later this year.

Subaru Corp announced today that the Japan-spec 2020 WRX and WRX STI will get minor exterior upgrades over the outgoing model. They should also carry over to the models shipped around the globe and to the U.S. The front grille of the WRX and WRX STI has been redesigned. Subaru says a plating mall has been added to emphasize the wing motif. Also, the color of WRX S4 2.0 GT-S EyeSight's 18-inch aluminum wheels have been changed from dark gun metallic to black.

The 2020 WRX STI gets newly-designed front fog lamp covers. The WRX STI Type S also gets a new 19-inch aluminum wheel that the Japanese automaker says “emphasizes the sense of movement.” We assume these wheels will be available on US-spec models.

On the 2020 Subaru WRX with EyeSight, the speed at which the high beam assist works has been changed from the conventional 40 km / h to 30 km / h. Always concerned with safety, Subaru says by starting operation from lower vehicle speed, the operating area is expanded and safety at night is improved.

Another minor change comes with the opening and closing method of the trunk. The 2020 WRX and WRX STI will now have a new trunk release that works without the key fob and can be opened when all the doors were unlocked.

You May Also Like: Are You Ready For Electrified Subaru WRX STI With A CVT Gearbox?

digitaldoc wrote on May 14, 2019 - 3:14pm Permalink
Pretty trivial upgrades. Too bad they dont give the STI treatment to any of their crossovers. Totally missed opportunity for them.
Big9er wrote on May 14, 2019 - 7:20pm Permalink
No thanks. I’ll keep my 2016 WRX with the few mods I have that will smoke that STI. We’ll just keep waiting until Subaru come out with a REAL new STI is in production.
darksi08 wrote on May 15, 2019 - 11:24am Permalink
Where was this announced? I can't find anything at all regarding the 2020 STI on the Japanese Subaru site, though I do see pictures with the new wheels. Source link for the actual press release? You seem to be the only news outlet to have picked this up...
Ahmed wrote on August 17, 2019 - 12:07pm Permalink
What abuot the enging for new 2021 sti...theay wil youse the old 2.5...or..new enging