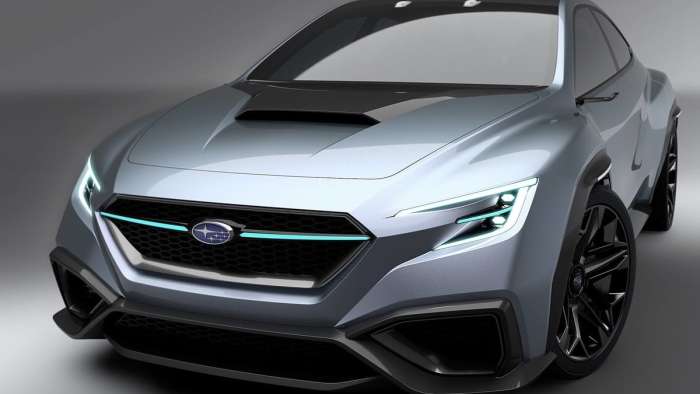 Are Fans Ready For Electrified Subaru WRX STI With A CVT Gearbox?

Can you imagine driving a plug-in hybrid Subaru WRX STI with a CVT automatic gearbox? It could come sooner than anyone thinks. Subaru revealed two new all-wheel-drive electrified models to show the world what they have planned for the future. It’s at the Geneva Motor Show where Subaru Corporation also brought a new “VIZIV Adrenaline Concept” that could be a preview of the new Subaru all-electric crossover called Evoltis. What’s next for STI fans?

Subaru will be bringing a new-generation WRX and WRX STI in the next year and it could get hybrid power. Subaru is moving in this direction as the new Global Platform that WRX and STI are being underpinned with, will allow for gas, hybrid, plug-in hybrid, and all-electric powertrains. Like it or not, eco-performance is coming to Subaru Tecnica International, Subaru’s performance and motorsports division.

Hybrid electric power could be a good thing for the WRX STI as the world slips closer to the EV tipping point. Electric power will bring even more torque which will be ideal coupled with a high-horsepower turbo Boxer engine. The hybrid STI will get improved performance and better fuel mileage. Subaru Europe’s sales and marketing manager David Dello Stritto confirmed that the WRX STI’s 2.5-liter turbocharged boxer powerplant won't’ be around much longer and said recently, it “can simply not exist in the future.”

What will power the Subaru WRX STI in the future? It’s likely to get plug-in hybrid technology being developed now by Subaru Corporation in collaboration with Toyota, Mazda, and Denso. Subaru has already developed new twin-turbo boxer engines like the 2.4-liter powering the new Ascent 3-Row family hauler.

Subaru could mate their WRX-sourced 2.0-liter Turbo DIT with an electric motor to drive the all four wheels for the new coming hybrid WRX STI. Or, it could get an all-new fuel-efficient twin-turbo FA24 2.4-liter boxer coupled with the plug-in hybrid technology. It’s also possible the new-generation STI will start out being gas-powered and switch a few years later to hybrid power.

Will Subaru drop the manual gearbox?

Subaru could also drop the 6-speed manual gearbox in the STI in the next-generation model and only offer it with the Sport Lineartronic CVT automatic transmission with paddle shifters. It’s because the Japanese automaker has a goal to be the overall safety leader and all models will need to come standard with their EyeSight driver assist. Subaru engineers have not been able to make EyeSight work with a manual gearbox. WRX already comes equipped with a CVT automatic with EyeSight, and the STI could be next to get it. Subaru UK boss Chris Graham said recently: “I’m not sure Eyesight is compatible at all with a manual gearbox. My gut tells me it (WRX STI) will be Eyesight with Lineartronic long term.”

Performance fans will see the new-generation 2020-2021 Subaru WRX STI get new eco-performance technology sooner than anyone thinks. The global tipping point for the end of the internal combustion engine is in sight. Plug-in hybrid power is coming next for the WRX STI, it’s just a matter of time. Will Subaru drop the STI manual gearbox? Look for a WRX concept rumored to surface at the Tokyo Motor Show in October. Stay tuned.

Guillermo Sánchez wrote on March 8, 2019 - 7:05pm Permalink
It's called "welcome the to future". My suggestion would be to bring it with another name. Many of the things that makes the today's STI enthusiast happy will be gone in that model. The rumble, the manual transmission, the hydraulic steering. Nothing of the present individual character of the car will be present in the future. I feel so happy to have been able to drive the 2018 STI. Thank you Subaru for keeping it until now. I will treasure it for as long as I can and this news made me happy about having made an extra effort to change my 2015 WRX only two and a half years later into my current STI. I feel as privileged as owner of a 993 911 Turbo would feel with that Porsche. The future came with better numbers, but never again with that character. Suburu is still allowing car enthusiasts to buy a car that returns so much in the driving experience still today.
Jason wrote on June 22, 2019 - 11:21am Permalink
Welcome the to future??????????? You mean where people can’t even nail the first line
Get it right wrote on March 11, 2019 - 8:43am Permalink
The FA24 is not twin turbo. It's a single. HUGE difference.
Christopher Myers wrote on April 5, 2019 - 11:48am Permalink
Yeah, I saw that too. It's a 'Twin scroll' turbo, not a twin turbo. A twin-scroll turbocharger gathers exhaust from pairs of cylinders in alternating sequence to maximize power with less lag. A lot of people mistake that term for twin turbo.I have a 2018 WRX Limited w/ 6 speed. I REALLY hope that they keep the stick. I have read other articles stating that Subaru is promising a stick for the US. If they go to an auto only, then it better be a twin clutch auto or sadly I'm not buying another.
Mr White wrote on May 14, 2019 - 7:53pm Permalink
Don't want a JATCO CVT. Don't want a Honda CVT. Don't want any CVT. When I buy a grocery getter with an auto, it's a traditional slushbox. Subaru already lost my business for CUT/compact SUV. One more thing. I liked the naturally aspirated 3.0 and 3.6 boxers. Much prefer them to forced 2.4 liter. (What happened to the Legacy GT, by the way?) Subaru is being betrayed by its own management.
Jo Mama wrote on May 17, 2019 - 5:49pm Permalink
An Automatic WRX? PUKE!!!