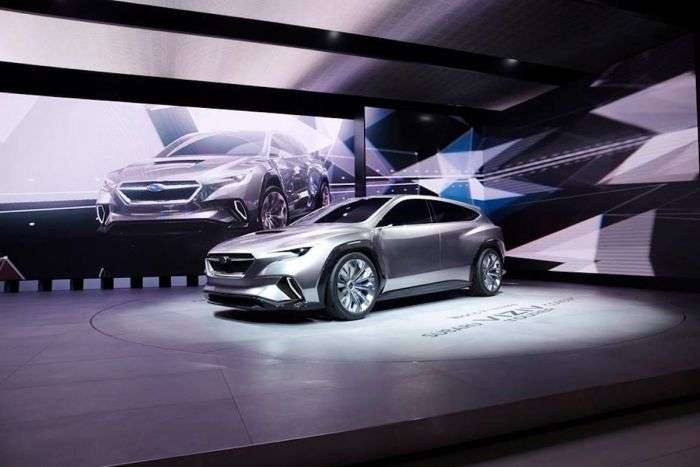 The next-generation Subaru WRX STI may have a CVT automatic transmission and come with Hybrid power.
Advertisement

Big changes are coming in the global performance car segment and Subaru’s next-generation WRX STI won’t be exempt from the coming EV revolution sweeping the automotive world. A report from the UK’s Evening Express, says Subaru boss of UK, Chris Graham says the redesigned WRX STI will likely have hybrid power when it is re-introduced back in the UK.

Subaru axed the WRX STI in the UK last year and launched a Final Edition 2018 model of 150 units. The performance model still lives everywhere else around the globe, but Subaru chose to drop the performance sedan at least temporarily in Europe. It’s likely due to the more strict emissions standards. In an interview at the Geneva Auto Show Graham said, “I’d never think it’s the final, final edition of the WRX STI. We don’t yet have any dates from Japan for a relaunch, but I think we could see it as a hybrid.”

Subaru doesn’t even offer a hybrid model in their all-wheel-drive lineup, but that’s changing this year. Subaru will use an existing nameplate, possibly the Crosstrek or Forester model to launch their next plug-in hybrid before the end of this year. The new Subaru Global Platform (SGP) first introduced on Impreza and Crosstrek, can be used to design a single concept for development of all models, adaptable to electrification in the future. All next-gen Subaru vehicles will get the SGP, and can be designed with gasoline engines, hybrid powertrains, plug-in hybrids, electric cars, and other types of alternative power units. Plug-in hybrid power is coming for the WRX STI, it’s just a matter of time.

Subaru could also drop the 6-speed manual gearbox in the STI in the next-generation model and only offer it with the Sport Lineartronic CVT automatic transmission with paddle shifters. It’s because the Japanese automaker has a goal to be the overall safety leader and all models will need to come standard with their EyeSight driver assist. Subaru engineers have not been able to make EyeSight work with a manual gearbox. Graham said: “I’m not sure Eyesight is compatible at all with a manual gearbox. My gut tells me it will be Eyesight with Lineartronic long term.”

Subaru has not announced when the all-new fourth-generation WRX STI will arrive, but it’s likely coming in 2020-2021. When it does finally launch, look for big changes in the drivetrain.