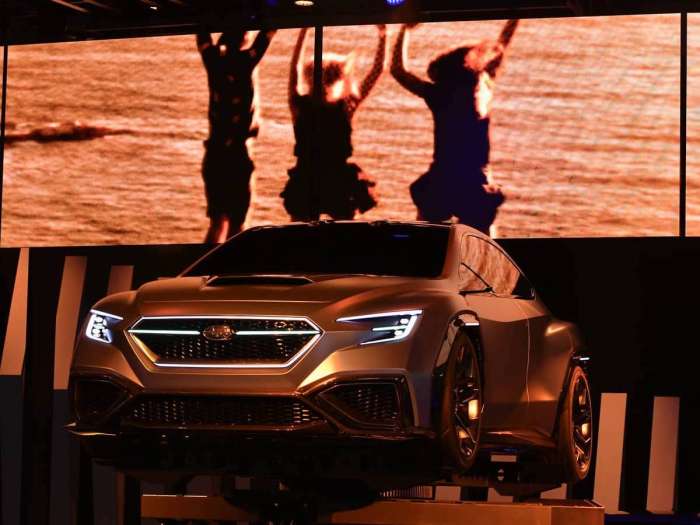 Subaru says the next-generation WRX STI will get a “bolder” design. See what Subaru’s new boss is thinking.
Advertisement

Subaru Corp has a new boss, and he’s going to enhance the performance lineup of the sport-tuned WRX and performance-tuned WRX STI. Tomomi Nakamura took over last week, and he isn’t wasting any time getting a new vision for Subaru Corporation. The Japanese automaker just unveiled a new Vision STEP plan “with the aim of becoming a company that is trusted by, and resonates with, customers.”

Performance fans have been asking for a new bolder design on the WRX/STI since the WRX Concept was unveiled at the New York Auto Show in 2013. Fans loved the concept and couldn’t wait for the next-generation model to be revealed. But when the 2015 Subaru WRX/STI was uncovered, fans weren’t too excited with the exterior design language.

The new 2015 WRX and WRX STI body style wasn’t what fans expected or wanted for the new-generation sports car. In fact, it was a huge let down for WRX and WRX STI enthusiasts around the globe. They thought the styling was just a mild makeover of the outgoing 2014 model. Even the teaser image of the WRX Subaru revealed a few days before it was unveiled in LA, gave the appearance of a whole new body style. But that didn’t happen when the covers were taken off on November 20, 2013.

A new vision at Subaru Corp

Subaru Corporation’s new President is changing things at Subaru and seems to be listening to performance enthusiasts. The STEP plan says in their product plans and design direction, that Subaru will launch fully-redesigned versions for key models every year and enhance distinctive SUV and sports models. It says, “We will evolve Subaru’s “Dynamic x Solid” design identity to a “bolder” expression.

After Outback and Legacy, the performance WRX and WRX STI will be the next models in the stable to get the new Subaru platform and they will likely arrive in 2020-2021. The sedans are due for a complete remodel and fans are hoping for even more changes like the 5-Door hatch body style to return, and a new FA20 2.0-liter DIT power plant under the hood. Neither has been confirmed by Subaru.

What fans can expect, is a new “bolder” exterior design on the next-generation 2020 Subaru WRX/STI performance models. Subaru has the WRX Concept to draw inspiration from and it’s already what fans want. Stay tuned.