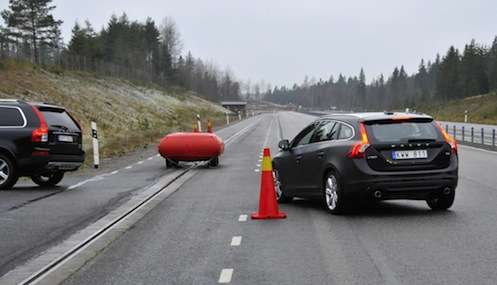 Report: No Volvo car will be involved in collisions in the future

Volvo is developing several new safety systems they say will keep vehicle occupants from being killed or seriously hurt in a new Volvo car.
Advertisement

In a press release by Volvo Car Corporation, they have a stated goal that by the year 2020, nobody should be seriously injured or killed in a new Volvo car. It goes even further and says the companies vision is that no Volvo cars are to be involved in collisions in the future. That is a very ambitious goal, but Volvo has always been known for their cars having the latest safety features, so it shouldn’t be a surprise.

A recent press release by the Swedish carmaker says that they are working on three new high-tech safety solutions to deliver on that goal. Jan Ivarsson, Senior Manager Safety Strategy & Requirements at Volvo Car Corporation, says "We are taking clear steps in the right direction. We have a number of research projects with the aim to develop technologies for future Volvo models.”

Modern technology is a key factor

Volvo is doing an ongoing intensive study to determine how modern drivers behave in traffic. And as we know, modern technology plays a big role in effecting today’s drivers. According to Volvo, surveys done by three different research institutes in the USA, reveal that modern drivers spend 25 to 30 percent of their time behind the wheel doing other things, and much of that time is focusing on mobile communication.

Drivers today are making phone calls, checking their email, looking at facebook, and sending text messages while they are driving. And since these take away a drivers attention from the road, this is where Volvo is spending their time developing new technologies to give modern drivers “the right support at all times.”

Volvo is focusing their new safety technologies on three main research projects that are currently in the works: Autonomous Driving Support, Intersection Support and Animal Detection. By the year 2020, Volvo wants every one of their cars to be fitted with this new technology they say will reduce driver distraction to the point that no passengers will be seriously injured or killed in one of their cars. How is Volvo going to pull this off?

It will start with Autonomous Driving Support that will keep drivers in their own lane and help them follow the normal flow of traffic. This will be accomplished with the use of a camera or radar sensor and will allow the car to respond to cars in front. The engine, brakes and steering will respond automatically to any changing conditions.

The second safety system being developed by Volvo is called Intersection Support. With intersections accounting for 21.5 percent of all fatal accidents, Volvo knows this is a key area of safety that needs to be developed. This new technology will also use sensors to detect any sudden change in traffic that could cause a collision. The Volvo car equipped with Intersection Support will automatically brake to avoid an accident.

The third safety system, Animal Detection, of course focuses on collisions with wild animals crossing the road. The report says that in the U.S., about 200 people are killed each year involving impacts with wild animals, most of them deer. The new safety system will detect an animal in the road and automatically brakes the car. Volvo says the technology will work in daytime and in the dark. The new system will also detect pedestrians which is already a current system that Volvo uses.